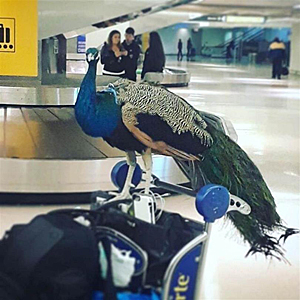 So, you may have heard about the lady who wanted to bring her emotional support peacock on board her United Airlines flight this past Sunday from Newark, NJ to Los Angeles, CA, only to have the airline deny Dexter (that’s the peacock) permission to board.

Emotional support animals have become a tricky thing of late, mostly because apparently greater and greater numbers of people have been abusing the status. It’s fairly easy to order a document and vest online for your dog or cat…maybe even your pot-bellied pig. And, it’s a touchy subject as well because most people get confused about emotional support animals and service animals, especially in regards to where they can go. This article helps lay out the differences.

Now me, I’m pretty much of an “Anybody can have any kind of emotional support animal that they want” kind of guy. If you’re not adversely affecting me, and in some cases even if you are, you should be free to have whatever animal you feel best with as your emotional support.

But, matters of safety are a different matter. If your emotional support animal is a crocodile, I might have issues with that while you’re around me in an environment that I cannot easily absent myself from, like an airplane.

Remember “Snakes on a Plane”??

But I like peacocks. I’ve taken some photos of beautiful peacocks in gardens and parks and zoos. Never had any attack me (knock on wood) or threaten me or peck me. Still, I don’t think a peacock could be stowed safely at the feet of its human passenger on a plane or not be a possible deterrent to people on that row safely evacuating.

So this was probably a good call on United’s part, even though I never fly that airline by choice.

Anyway, Dexter (who, by the way, has his own Instagram account) and his human ended up making a road trip of the situation and drove cross-country. I hope he gets to spread his gorgeous plumage in Los Angeles, even if he was grounded.