It’s difficult to believe it has been 30 years since “Easy Lover” was released. That’s half my lifetime ago! But it’s still one of the songs on my “Favorites” playlist to this day. 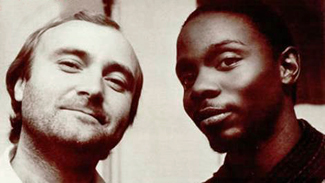 Unlike most music videos of the day (remember MTV and VH1, when they actually played music videos?), which typically tried to tell the story of the song in their video, “Easy Lover” was essentially, as Phil Collins points out in the short intro, a video of them making a video.

“Easy Lover” reached the number 2 spot on the U.S. Billboard Hot 100 and won an MTV Video Music Award for Best Overall Performance in a Video in 1985.

<In my radio DJ voice> Here’s your blast from the past, “Easy Lover” by Phil Collins and Philip Bailey.