A couple of months ago, Amazon talked about using drones to deliver packages to customers and last week Facebook revealed it may use drones to provide Internet access to areas of the world that cannot otherwise receive it (as opposed to Google’s Project Loon idea of using high-altitude balloons to do the same).

The FAA has regulatory oversight regarding drones and high-altitude balloons here in the U.S. but will probably be turning its attention to drone usage first, especially in light of a judge’s ruling on Thursday that commercial drone usage is legal.

Of more interest to citizen’s of the U.S. would be Amazon’s plan to deliver packages via drones. While I think it would be pretty cool to get a text message advising me that the drone was about to deliver my order, going outside and watching it land on my front driveway, deposit the package and go airborne again to return to the warehouse, I can see a lot of issues that may arise. Wrong delivery coordinates, someone stealing the deposited package before the customer can retrieve it or some yahoo shooting drones down out of the sky as they travel. 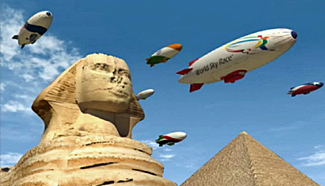 Regarding Facebook using drones; while I was visiting my friend Kirk the other day, we were discussing this subject and I wondered why Facebook wasn’t considering using small dirigibles to fly over areas, as opposed to drones. I’m sure there’s a good reason and smarter minds than mine have surely considered the possibility and dismissed it as not optimum to what they want to accomplish, but I couldn’t help but wonder. Maybe they are too easy to shoot down or disable or perhaps too slow and limited in range.

But they would look much cooler than drones in the upper atmosphere.