(Don’t Take Me) Half The Way 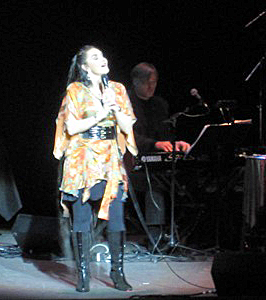 The other night I was working on my laptop and listening to music on my old iPhone that I have more or less converted into an iPod to just play music, when a song came up on the shuffle rotation that I had not heard in a long time.

Back in 1977 country music performer Crystal Gayle had her first crossover hit (and it remains to this day her most successful release) with the jazz-tinged ballad, “Don’t It Make My Brown Eyes Blue”. I liked the song very much. Ms. Gayle was an attractive performer with beautiful blue eyes herself and hair so long it reached down to her legs, but it was her voice that first captured my attention when I heard it on the radio 36 years ago.

In 1979 her first single off the album “Miss The Mississippi” was “Half the Way” and it quickly reached number 15 on Billboard’s Top 20 chart, number 2 on the Country chart and number 9 on the Adult Contemporary chart. It was, and is, my favorite Crystal Gayle song and it was also her last hit to reach the Top 40 Pop chart.

Several years ago Cindy and I went to see and hear Ms. Gayle in concert at Orlando’s Sea World. Even though we were waaaaaayyyyy up in the nosebleed seats of the outdoor amphitheater, I was excited to be able to see her perform live. It’s one of those memories I’ll keep with me for a long time.

Listening to “Half the Way” made me wonder if Ms. Gayle was still performing, and she is! She, of course, has her own website and I found this review of her concert in California this past February with lots of photos.

And yes, she still has the incredibly long hair!