Did You Know…That Mount Vesuvius Destroyed Pompeii On This Date?

Monday , 24, August 2015 J.M. Wetherington Sr. Did You Know...? Comments Off on Did You Know…That Mount Vesuvius Destroyed Pompeii On This Date?

Mount Vesuvius erupted, destroying the Roman city of Pompeii, on this date in the year 79. Pompeii was about five miles away from the mountain, and it was a resort town for Rome’s elite. It’s estimated that about 20,000 people lived in and around Pompeii at that time, and most of them were able to escape relatively unscathed.

Just after noon, a plume of ash, pumice rock, and debris shot up into the air and began falling on the surrounding area. Before long, the ash in the streets of Pompeii lay nine feet deep. Pliny the Younger witnessed the eruption of Vesuvius from across the Bay of Naples, and noted that the billowing soot, rocks, and gas looked like an enormous pine tree. It eclipsed the sun.

“Darkness fell,” Pliny wrote, “not the dark of a moonless or cloudy night, but as if the lamp had been put out in a dark room.” Even from his safe distance, he observed, “I believed I was perishing with the world, and the world with me.” About five thousand people died – most likely from a blast of blistering hot, poisonous gas, not debris or lava – and the whole city was buried under millions of tons of ash and debris.

Pompeii and the nearby city of Herculaneum were rediscovered in the 18thcentury. They were almost completely intact, buried under about 23 feet of volcanic debris. The modern science of archaeology was born with the widespread excavations of the two cities. The excavation is still ongoing today, with about one-third of Pompeii still buried. 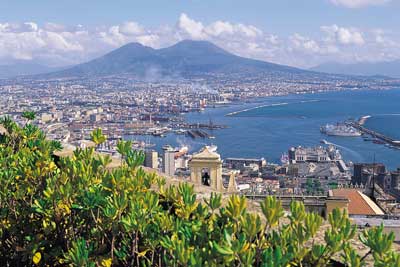 Mount Vesuvius erupted last in 1944, and experts believe it could erupt again at any time.

Today, about 3 million people live within a few miles of the crater; 600,000 of them live close enough to the volcano that they would not survive an eruption today. Scientists monitor the volcano – one of the world’s most dangerous – around the clock and have a plan to evacuate the area in advance, if an eruption seems imminent.