Did You Know…The First Drive-In Theater Opened On This Day In 1933? 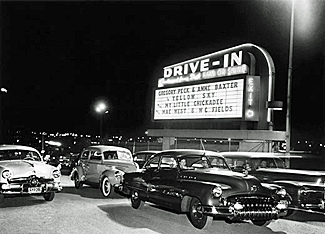 Richard Hollingshead Jr. was a sales manager at his dad’s auto parts store in Camden, New Jersey. In his spare time, he dreamed of creating something that would bring a little fun to the tough daily life of the Depression era. He was also thinking about his mother, who was a little bit overweight and wasn’t comfortable in movie theater seats.

Hollingshead applied for a patent in May of 1933. With an initial investment of $30,000, he opened his first theater just three weeks later, on Crescent Boulevard in Camden. Six hundred people turned out on opening night. The cost was 25 cents per car, and 25 cents per person after that, with a cap at one dollar. He called it a “Park-In” theater, and his early ad campaigns targeted families. He said, “The whole family is welcome, regardless of how noisy the children are.” 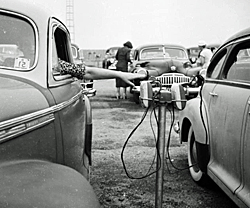 Remember the drive-in theater car speakers? You would roll your window down, pull the heavy metal speaker into the car, then roll the window up partway and hang the speaker on the edge of the glass.

Drive-ins hit their peak in popularity in the 1950s and early 1960s. At one point, there were almost 5,000 drive-in theaters in the United States. Now there are fewer than 500 today.

I remember, as a kid, my parents would take my younger brother and I to the drive-in with the back floorboard stuffed with pillows to make it even with the back seat, cover the entire area in a blanket, then add pillows for our heads and blankets to cover us so we could sleep as they watched movies at the drive-in.

The first movie I recall seeing at the drive-in was One Million Years B.C. with Raquel Welch in 1966. Though I know we went to earlier drive-in movies, that’s the first one I remember seeing and it’s probably because I wasn’t falling asleep as early as my younger brother did by that age. Plus, I mean, c’mon, it was Raquel Welch for cryin’ out loud.

The last time I went to a drive-in movie was 20-something years ago when I took a date to the drive-in on East Colonial Drive in Orlando and watched Ghost for the third or fourth time with as many dates. A few years later the drive-in closed and as far as I know there are none left in Orlando.

Did you ever go to a drive-in theater?

Thanks to The Writer’s Almanac for portions of the above.