Did You Know…? Happy Birthday, SPAM!

SPAM, the canned-meat product from Hormel, turns 78 years old today. Anytime in the past that I’ve seen an open can of SPAM it looked like it was ALREADY at least 78 years old!

Now, I have eaten SPAM, but it has been so long ago that I’m sure I have purged all evidence it was ever in my body. And the only way I could eat it was to slice it VERY thin and then fry the thin slice until it was, as my late father would say, “as tough as shoe leather” before I could even put it in my mouth.

My late paternal grandfather owned an auto repair garage across the street from a Hormel plant. He would say that, at the end of each shift, he would see workers grab brooms and shovels and they would sweep and shovel up all the scraps of meat and meat by-products off the floor, and that is what they used to make SPAM.  He was joking, but yuck! 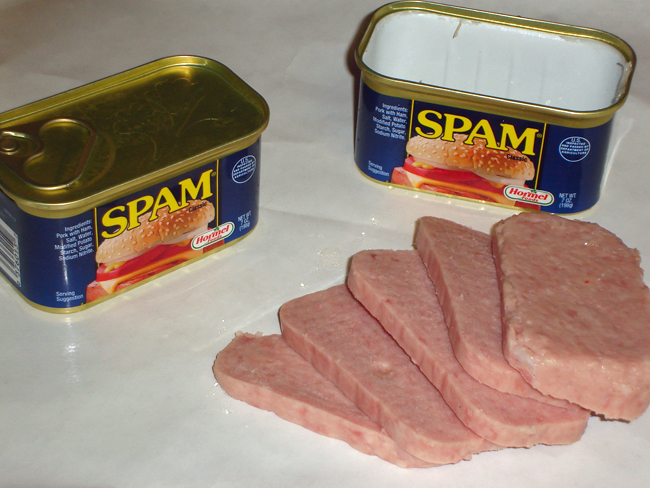 What is SPAM, really?

It is precooked pork and ham in a can, with a little potato starch, salt, and sugar. Sodium nitrate is added to keep it pink; without it, pork tends to turn gray.

There’s no consensus on what the name actually stands for; one theory is that it’s a combination of “spiced meat” and “ham.” In Britain, where it was a popular wartime food, they called it “Specially Processed American Meat” or “Supply Pressed American Meat.” A host of tongue-in-cheek acronyms have also arisen, like “Something Posing As Meat,” and “Special Product of Austin, Minnesota,”

Whatever it stands for, Hormel specifies that it should be written in all caps.
Thanks to The Writer’s Almanac for portions of the above.

Tags:Birthday, Did You Know?, Spam