…that on this day in 1951, the Remington Rand Corporation signed a contract to deliver the first UNIVAC computer to the U.S. Census Bureau. UNIVAC I (which stands for Universal Automatic Computer) took up 350 square feet of floor space — about the size of a one-car garage — and was the first American commercial computer. It was designed for the rapid and relatively simple arithmetic calculation of numbers needed by businesses, rather than the complex calculations required of the sciences. It was intended to compete against IBM’s punch card-reading computers, but UNIVAC read magnetic tapes, not punch cards, so a special “card to tape converter” had to be designed.

Though the government contract was signed, and a ceremony held, on March 31, the computer wasn’t actually delivered until the following December; this was because there was only one UNIVAC I, and Remington Rand wanted to use it for demonstration purposes. So they asked for and received time to build a second computer. 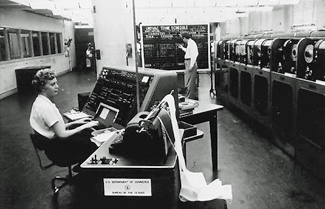 UNIVAC in use at the U.S. Census Bureau

The government was the first big customer of the UNIVACs, with subsequent models going to the Air Force, the Army Map Service, the Atomic Energy Commission, and the Navy. The first commercial sale was to General Electric, for their Appliance Division, followed soon after by the Metropolitan Life Insurance Company, in 1954. There were 46 UNIVAC I’s built and delivered, in all.

The computer first came to the notice of the general public in 1952, when CBS used one to predict the outcome of the presidential election. UNIVAC correctly picked Eisenhower and predicted his electoral count within 1 percent, but the network didn’t release the results until after the election was called, so as not to affect the outcome. 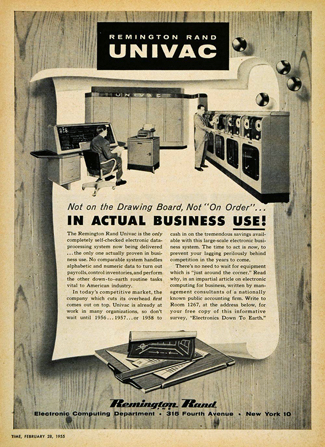 Ad for UNIVAC in 1955 Time Magazine

It’s pretty incredible to think that, in little more than a half century, we have thousands of times more computing power in our smartphones than the UNIVAC had in it’s 350 square feet of floor space.

There’s an old joke that goes like this: A bunch of scientists created a huge machine capable of complex calculations and called it UNIVAC. Eager to test their invention, they asked it, “Is there a God?” The vacuum tubes hummed and the tape spools spun for several minutes. Finally, the machine spit out a little card, on which was written, “THERE IS NOW.”

Thanks to The Writer’s Almanac for portions of the above.