…that Vermont became a state on this date in 1791 and that it was the first state (after the original 13 colonies) to join the Union that would become the United States of America? 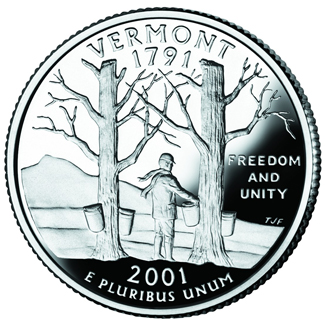 The reverse side of the 2001 Vermont Quarter.

It’s the second-least populated state in the nation, and only five states are smaller in land area. In the past decade, it’s been ranked first as the most healthful place to live — more times than any other state.

It has an eccentric political history. It was an independent nation, the Vermont Republic, for 14 years (1777-1791). It had its own money, sovereign government, and a constitution that explicitly forbade slavery — almost a century before the United States did. It also required government taxes to support public schools.

Since 1856, Vermont voted Republican in every single presidential election except one (in 1964, it voted for Lyndon Johnson over Barry Goldwater). But beginning in 1992, Vermont has voted Democrat in every presidential election. It was the only state in America that George W. Bush did not visit during his two terms as president. It became the first state to allow and recognize civil unions between same-sex partners in 2000, and was the first state to legalize same-sex marriage legislatively (Massachusetts was the very first state to legalize same-sex marriage in 2004, but it was through a court ruling). 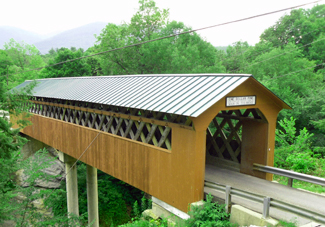 The sign on top of this bridge reads; One Dollar Fine For Driving Faster Than A Walk On This Bridge

It vies with New Hampshire for being the least religious state in the union. Only half of Vermonters say they believe in God, compared with about 70 percent of the rest of the nation. People there attend weekly services at a much lower rate than other Americans, and a much smaller percentage say that religion is important to them. There are, however, a disproportionately high number of American converts to Buddhism living in Vermont, and there are several Buddhist retreat centers throughout the state.

But most important of all, it produces more maple syrup than any other state in America.