The Circus And Animal Performers 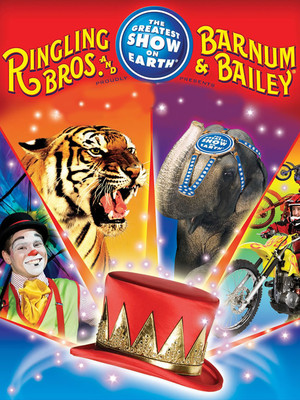 Saturday, my step-daughter and granddaughter went to see the The Ringling Bros. and Barnum & Bailey Circus at the Amway Center. When my granddaughter Abby began excitedly telling me about the tigers and elephants she saw, it reminded me of a post I wrote back in 2006 about a protest for animal rights that took place when the circus was in Orlando that year, and I thought I’d re-run it here today.

The Ringling Bros. and Barnum & Bailey Circus came to Orlando last night for its opening show at the T.D. Waterhouse Arena. I haven’t been to a circus since my grandfather took me as a child, but Man About Town wasn’t there last night to see the circus, he was there to see the protest.

The Animal Rights Foundation of Florida (ARFF) had scheduled a silent vigil for 6pm at the Amelia Street entrance to the Arena, inviting organization members and any interested citizens to participate and asking participants to wear black. ARFF is, according to their website, “…an organization founded on the principle that animals have the right to live their lives free of exploitation, abuse and harm inflicted upon them by society.” It’s also an amusing yet appropriate acronym, given their cause.

I arrived at the Arena 5:50pm, but since I had no intention of paying the newly raised ($8 as of December 5, 2005) parking fee when I wasn’t attending the actual event, I spent a few minutes driving around looking for an off-premises parking spot. Fortunately I found one on East Colonial in front of Lake Dot and took a leisurely walk around the lake and made my way to the Amelia Street entrance.

Approaching the Arena area, I could hear a circus barker with a megaphone inviting kids to stop by his booth to get a free circus coloring book. As I walked up to Amelia Street, I came up behind approximately a dozen protesters, all dressed in black, silent, lined up along Amelia holding signs for pedestrians and those driving by to see. I asked one of them if there was someone I could talk to about the protest and she directed me to a young man behind a table in the grass surrounded by homemade gravestones that detailed the names and death dates of animals that had died under the care of the circus.

Bryan Wilson, Coordinator for ARFF, was kind enough to speak with me, answer all my questions and share the organization’s three-minute video on the portable display worn by one of the protesters. Bryan was NOT the wild-eyed, disheveled proponent I had half-expected to meet, nor were any of the people I observed conducting the silent, peaceful protest. Bryan was articulate, calm, confident and knowledgeable.

ARFF claims a total membership of approximately 4,000. I asked Bryan how many were there last night and he pointed out the dozen or so holding signs and told me several others were out of our sight in the area handing out flyers. I asked if a fair estimate would be 20-25 and he agreed. Frankly, when I was planning to come out to cover the protest, I thought I would see a larger crowd. However, having been a member of several different organizations over the years, I know how hard it is to get lots of people out for an event, especially if it’s a weekday and/or school night. 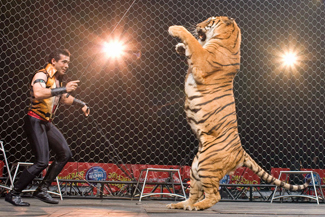 Bryan shared with me the stories of some of the unfortunate animals, mostly elephants, who are used by Ringling Bros. and Barnum & Bailey Circus, as well as dozens of other circuses across the country. He pointed out how the animals spend all of the time they are not being trained or performing locked up in cages or, in the case of the elephants, chained by the legs in one spot, forced to stand in their own urine, feces and food. The training videos (taken by undercover activists or turned over by former trainers) show horrible, abusive and painful techniques used to force the animals to perform acts that are not natural behavior for them. Elephants do not stand on pedestals in the jungle or pose with a leg up while a beautiful woman sits on their back. Tigers do not jump through hoops of fire in the wild.

It was sad, even for someone who is ambivalent about the subject like I am, to watch creatures of the earth being treated the way these gentle giants were, just to satisfy someone’s idea of entertainment.

I mean, sometimes it’s necessary to do product testing on animals before you do human trials, right? And most kids (or adults, for that matter) would never see animals like lions, tigers, elephants or killer whales in person if it weren’t for zoos or places like Sea World, right?

On the other hand, I feel sad when I stop and consider that a mighty, noble creature like a killer whale will spend it’s life in what amounts to a giant pool, never swimming free across the vast open waters of earth’s oceans as they were intended to do, with no fetters on their freedom. I’m not for cruelty to animals, I have a dog and a cat that I love, but is even the care and love I give them a benign sort of confinement? Is it the same as a place like Sea World, just on a smaller scale? To what extent do we draw the line, if at all?

I suppose we must each answer that question for ourselves. I’m glad we live in a society where animal rights activists can openly and peacefully protest the mistreatment of animals in a circus. I’m glad they can present their point of view for others to consider. I’m glad that we each have the freedom to make a choice.

Maybe that same choice should be granted to all life.

It does seem wrong that any creature would have to suffer and live the kind of life that organizations like ARFF say circus animals live.

What do you think? Are there gray areas, or is it black and white, cut and dried? Is there a question, or no question at all?