Our Christmas Day actually began on Christmas Eve with most of the family gathering at Cindy’s parents’ home at 5pm. After a wonderful meal and Christmas present-opening, several of us took our traditional walk through the neighborhood to enjoy the decorated homes. 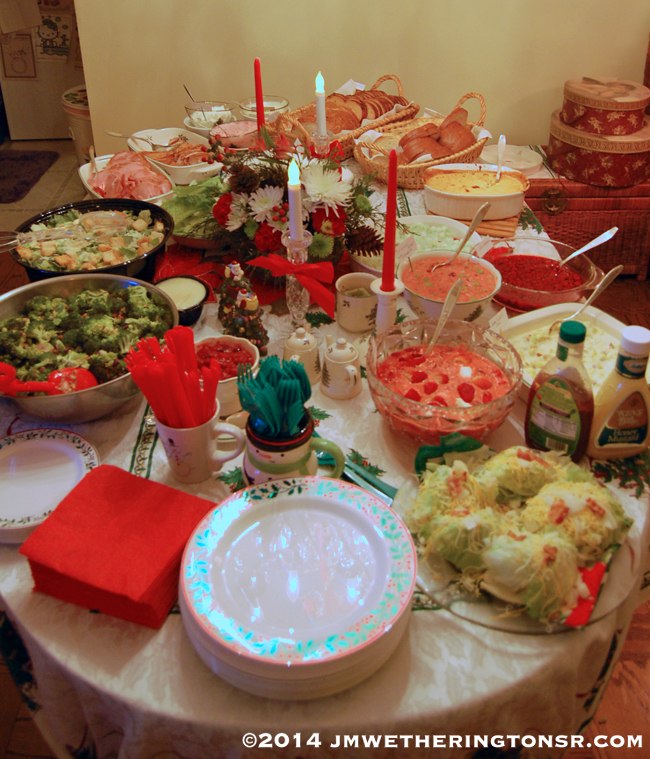 One table of food for the 30 or so family members and friends gathered together on Christmas Eve. There’s another table in the other room and the breakfast bar in the kitchen is covered in desserts while the kitchen island is filled with various beverages. 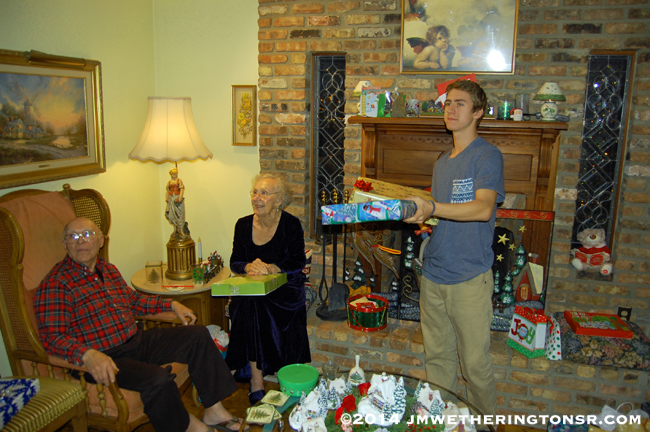 That’s our nephew Chase handing out presents that were underneath the tree, and Cindy’s mom and dad enjoying the proceedings. 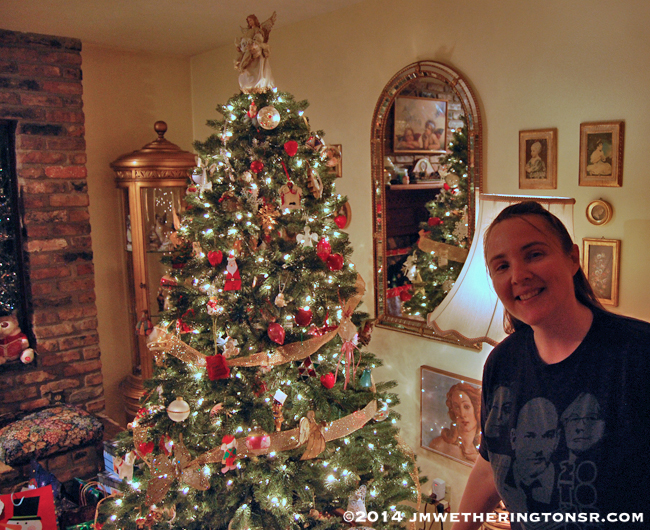 That’s my Princess in front of the Christmas tree.

At 7am Christmas morning, Cindy and I arrived at Amber’s. We got to wake up our 5 year old granddaughter Abby to tell her that Santa had come and left gifts for her, along with gifts from mommy and grandma and granddad. 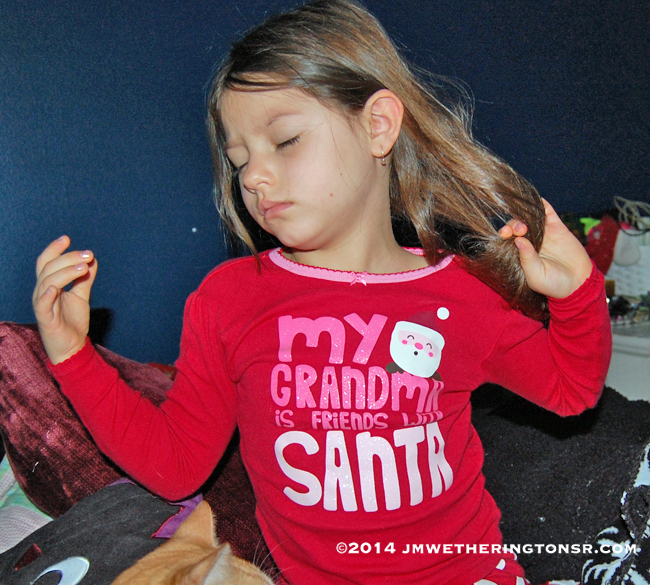 Our 5 year old granddaughter waking up on Christmas morning. 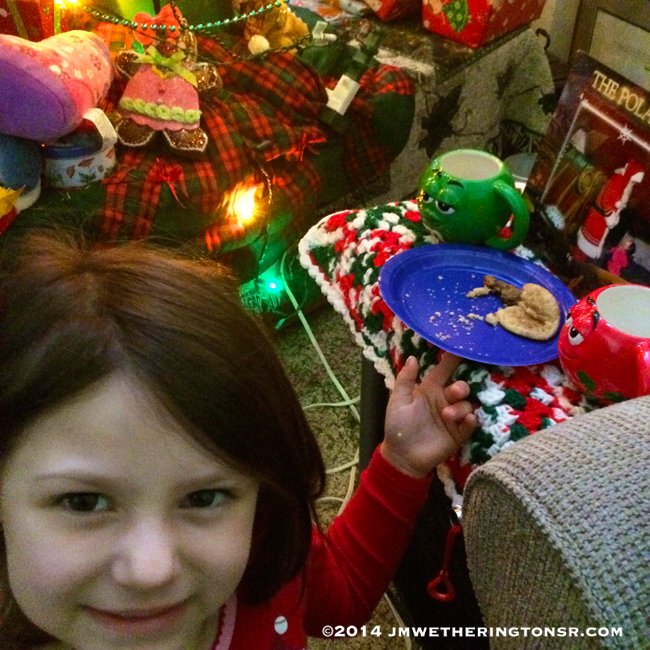 Abby knows Santa came while she was sleeping because the milk and cookies are almost all gone. 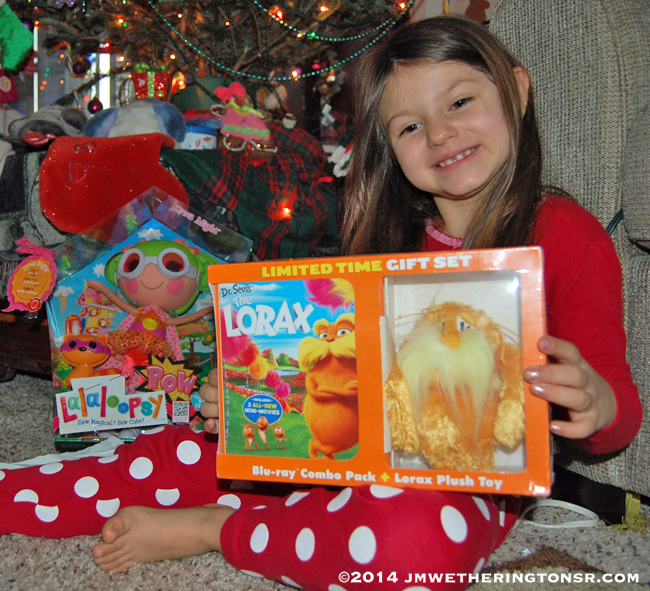 Abby holds one of her Christmas presents with others behind her.

Then at 9am the four of us went over to Ann’s to exchange gifts with her and our oldest grandchildren, 13 year old Mikey and  9 year old Heather. 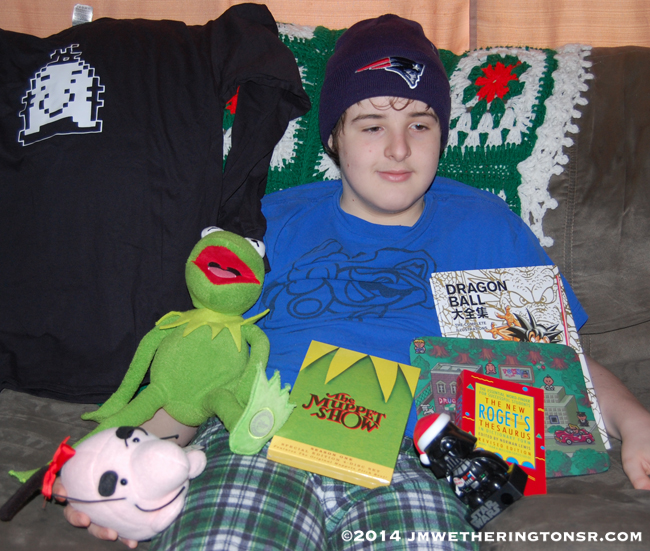 Mikey with some of the Christmas presents he received. 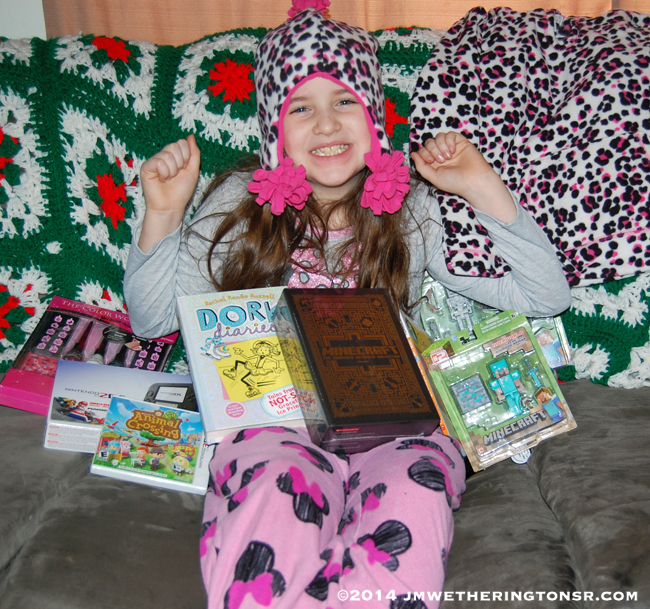 Heather with some of the Christmas presents she received. She looks pretty pleased with what she got.

Cindy and I returned to our hotel room to drop off gifts and refrigerated goodies and had a few minutes to Skype with our youngest grandchildren in Texas; almost-5 year old Jade and almost-2 year old Maxwell. It was a real kick to hear Maxwell say “Merry Chritmas!” (that’s not a typo) to us before we left to go catch an 11:20 showing of “The Hobbit: The Battle of the Five Armies.”

At least it was supposed to be an 11:20 showing when I purchased the ticket on Fandango the day before. However when we arrived the sign outside the theater said it was a 12:00 pm showing. I went to the manager and he apologized, saying the schedule had been changed due to dropping “The Interview” and apparently Fandango hadn’t received the updated schedule. He gave me four free passes for our inconvenience so now Cindy and I can go to two more movies for free.

But I’m not too excited about that. I’ve grown to really despise the theater experience. During yesterday’s movie we had a crying baby, someone sitting near us that reeked of so much cologne that it was choking us and a jerk in a row in front of us who kept pulling out his phone to check it; not a problem except his screen was so big and bright it was like a spotlight. Even a woman behind us shouted out, “TURN OFF YOUR PHONE” but of course he didn’t for another 2 minutes because, like most people in movie theaters these days, he had no sense of common sense or common courtesy. There are very few movies that I want to see badly enough to put up with the poor behavior of the rude people who seem to feel that they are still sitting in their own home watching the movie rather than in a public venue with their fellow citizens. So we’ll see how quickly we make use of the free passes.

Then Cindy and I went to Miller’s Ale House on Semoran near the airport and had a nice meal, went back to the hotel room for a short nap. Then we munched on some of the holiday goodies we had with us, watched “Bridesmaids” commercial-free on AMC (her choice, not mine, though it did have its funny moments) and then went to bed.

All in all, it was a nice day.