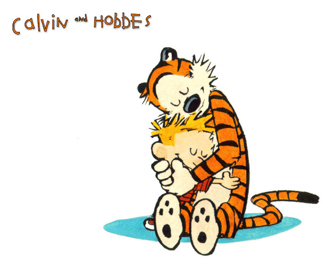 I am a huge fan of “Calvin and Hobbes” and have mourned their absence of original strips since Bill Watterson retired the strip almost 20 years ago.

But I wasn’t always such a huge fan.

When the strip first debuted almost 30 years ago I was not impressed. My initial reaction was, “What a brat!”, lol, and I remember thinking, “If I had said even SOME of the things this little twerp says when I was a boy, my mom would have beaten me within an inch of my life.”

But every day the strip appeared in my local newspaper and eventually I found my eyes drawn to the bratty little kid and his make believe tiger. I slowly began to find myself laughing at the cultural, political and psychological commentary Watterson was making through the strip and it wasn’t long before “Calvin and Hobbes” became the first strip I would read each day when I opened up the comics section.

Yesterday my daughter, remembering her dear old dad’s fondness for the strip, sent me this link that chronicles (unofficially) the final talk between Calvin and Hobbes, on this plane of existence, at least. I will admit to being a bit teary-eyed by the time I reached the end, because the story explores those elements of childhood that most of us seem to leave behind in our rush to adulthood.

I don’t know who wrote this “conversation” and I can’t tell from the post because it looks like, from the “This Guy Just Changed The Way We See Calvin And Hobbes. Seriously.” line that dalaffalolz is just posting this from somewhere else. But to whomever the author might be, I tip my hat to you for the wonderful end to the story that was started so many years ago.