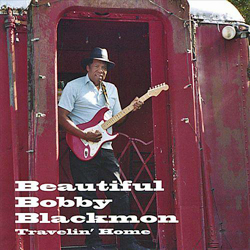 Back around the first of November, just before we were going to leave Wolf’s Haven to return to Orlando, I decided I wanted to go through all of my CD’s and burn them into mp3’s so I  could have all my music on my iPhone. As it turned out, I ran out of time before I ran out of CD’s, but I got most of them done.

I came across my “Travelin’ Home” CD by Beautiful Bobby Blackmon and got to thinking about when and where I bought this CD of his. I remembered that I had written about it before (before this blog) and a few days ago I found that old post and thought I’d re-post it here. 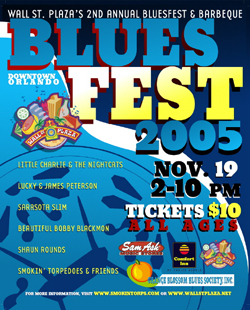 Last Saturday I got together with some friends; Carsten, Trey, Susan, Rebecca and Cindy, to enjoy some music in a blues state of mind at the 2nd Annual Blues and BBQ Festival known as Bluesfest 2005. This event was a celebration of the birth of the Orange Blossom Blues Society and featured performers such as Little Charlie and the Nightcats, Lucky Peterson, Sarasota Slim, Shaun Rounds, the Smokin’ Torpedoes (a main festival organizer) and, the one I wanted to hear specifically, Beautiful Bobby Blackmon.

Cindy and I rode together and arrived at about 4pm, before everyone else. We grabbed some BBQ chicken sandwiches and some liquid refreshment, (beer for me Coke for her) and found an empty table about halfway down Wall Street. We sat and listened to the last part of Shaun Rounds’ performance and at about 4:20 Rebecca called Cindy to let us know they were there and had gotten a table up at The Globe restaurant, which was right in front of the stage. Bobby Blackmon was due to start at 4:30 and we were settled in and ready.

It was actually about 4:40 by the time the Beautiful one started to play, but it was worth the wait. The line-up of bands represented an eclectic variety of blues, but it was Mr. Blackmon’s mostly Rhythm and Blues style that I had come to hear. I was so enthralled that I neglected to write down his songs as he performed them, but I believe he opened with “Movin’ In The Wrong Direction” from his latest CD “Travelin’ Home” (which sounds as if it will be as full of good music as his “I’m Dialin 911” CD from 2002 was) and then followed up with “I Don’t Know But I Gotta Go”, “I Been Down So Long”, “Feels Like Rain” and “If Mama Ain’t Happy”, among others.

People kept getting out of their seats and dancing in front of the stage, as if their bodies could not sit still while this master Bluesman played and sang music that moved their bodies and their spirit. From slow and soulful to toe-tappin’ shake your booty, Beautiful Bobby covered it all in his hour on stage. Like James Brown, he is “the hardest working man”, as evidenced by the perspiration pouring from his body as he performed. By the time his set ended, the man was soaked.

At the end of his performance I made my way over to where that latest CD was being sold and bought a copy. At $15, it’s a steal and I’m pretty confident you’ll love listening to it as much as I do. As his set ended, I had to take leave of my friends because of some other activities, but they told me later they stayed all the way through until the end at 10pm and had a great time. I’m looking forward to next year’s Bluesfest and plan to bring my own chair and definitely stay longer next time to hear all the bands.

I never got to go back to the next year’s Bluesfest, or any subsequent year for that matter. But I DO get to enjoy the music of Beautiful Bobby Blackmon whenever I want.