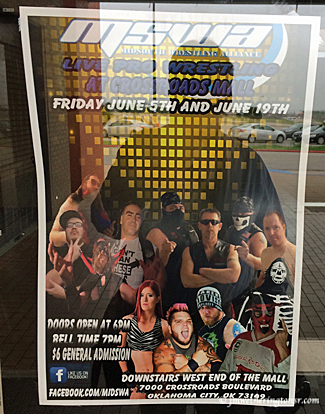 So when I arrived at our office, which turned out to be in a what-used-to-be-mall-that-everyone-went-to but, not so much anymore, on my first day at work there was this poster on the entry door, advertising an upcoming show put on by the Mid-South Wrestling Alliance.

I like going to local wrestling events and watching the working guys and gals, the ones who usually have a day job and then practice wrestling at night and put on shows on the weekend nights; sometimes to earn a little extra money, sometimes just to do what they’ve wanted to do since the first time they watched a wrestling match on TV. I know how that feels. And the show was going to be right there at the mall where our office was, so all I had to do was grab a quick dinner somewhere after work on that Friday and come back to watch the show.

Here are some photos from the Mid-South Wrestling Alliance event that Friday night. 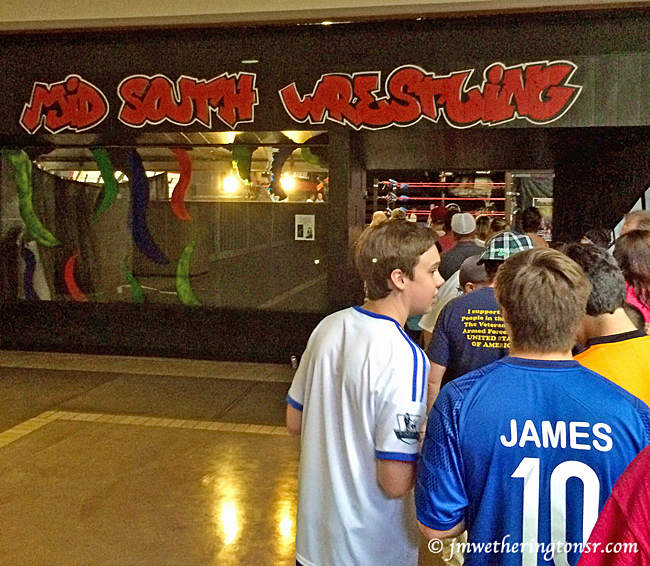 Here’s the entrance to the Mid-South Wrestling Alliance “arena” at the west end of Plaza Mayor Mall, formerly Crossroads Mall. I estimated the gate to be about 200 people. 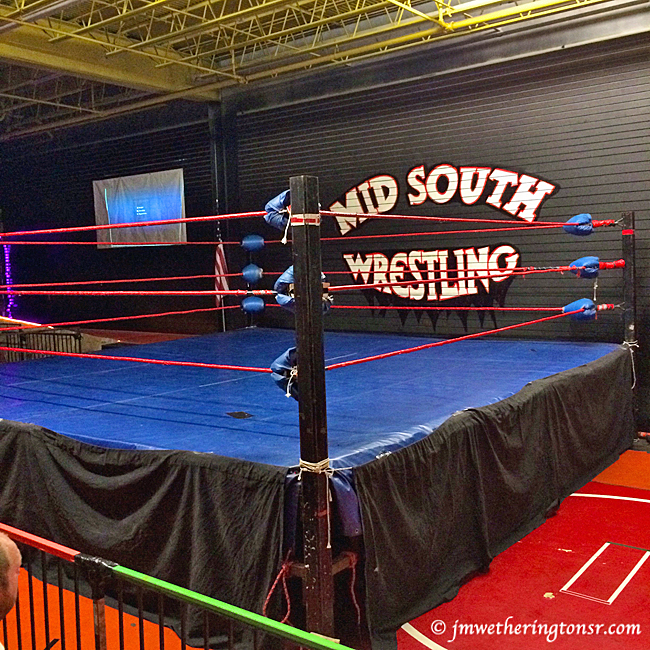 Admission is very reasonable, only $6 and I found a place to sit on the highest section of wooden benches. I thought the ring we used to work in for Renegade Wrestling was pretty bad, but this one looks like it’s even worse, though I can’t say for sure since I didn’t work it. However, pay close attention to the unwrapped ring ropes in the right corner; they’ll come into play later. 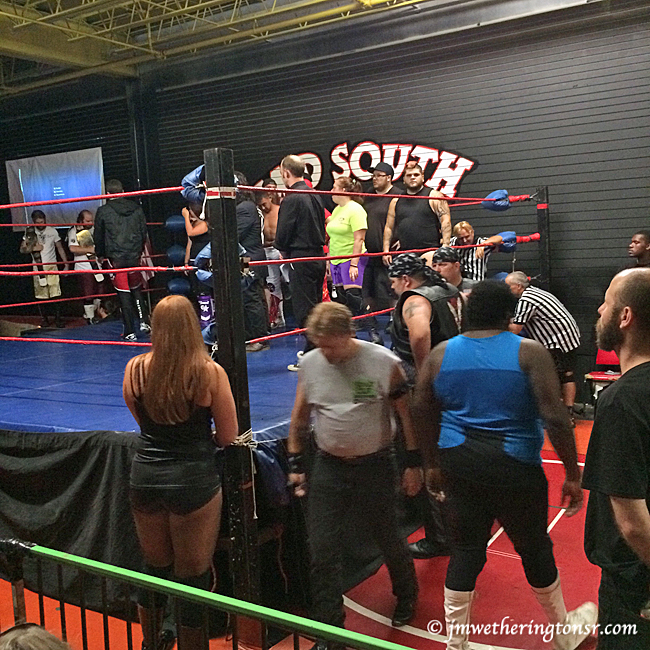 Before the matches began, the entire roster came out for the tolling of the ring bell 10 times in memory of the recent passing of wrestling legend Dusty Rhodes. 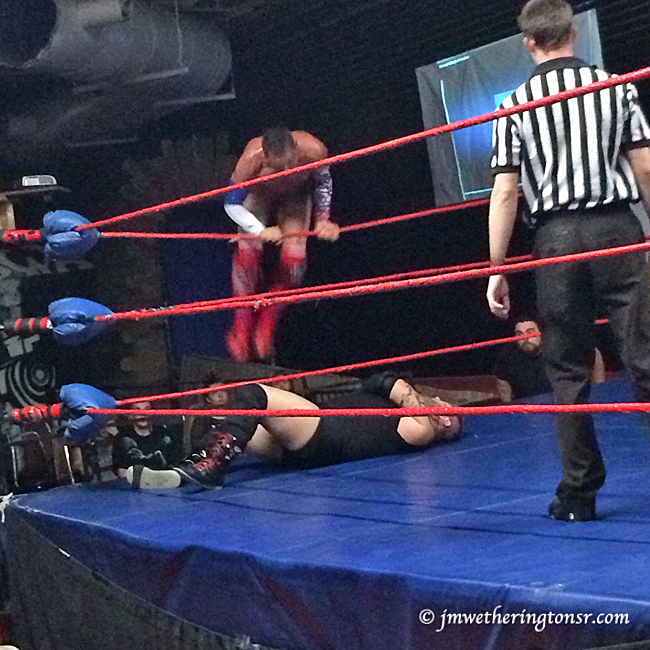 The card had 6 or 7 matches that night. These two guys were the best match of the night, but I can’t tell you their names because the sound system wasn’t very clear. In fact, it was worse than using the drive-thru speaker at a fast food restaurant. 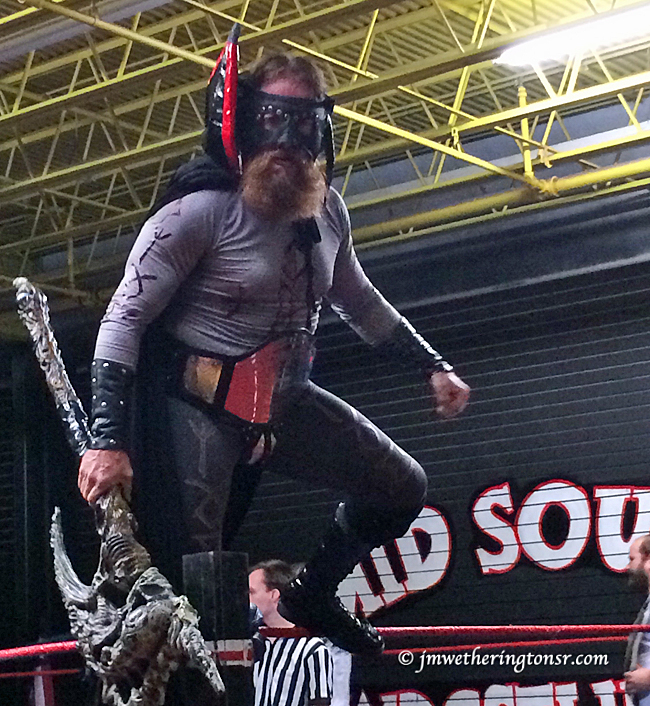 This guy won the “Best Costume Award”, at least in MY book. But he made a laughing stock out of himself when (remember that unwrapped ring rope I told you to make note of?) he tried to make a flip-off-the-rope entrance, slipped, and landed mask first (yes, he wore the mask throughout the match) on the mat with the crowd simultaneously gasping (because it looked like he had broken his neck) and laughing (when they realized he hadn’t). They really should fix that rope.

I watched the heel in the opening bout try to apply the figure 4 leg lock on the babyface the WRONG way and could see the face trying to whisper and motion to him, without being obvious, that he needed to go the OTHER way.

The third match of the night involved a wrestler in a red body suit, boots, and mask, with the word “Fuego” (Spanish for “Fire”) in yellow on his ass. A woman in a ringside seat kept yelling “Get ‘im Foo Ego” and “Come on Foo Ego!”, in all seriousness until she finally heard the crowd pronouncing it correctly about halfway through the match. I could not stop laughing.

By the time the show was over, about 2 hours later, my ass was dead asleep from sitting on the wooden bench, but I had enjoyed some fun entertainment.

And that was my night of Big Time Professional Wrasslin’ in OKC.