The Batman TV series, which aired for 3 seasons in 1966 – 1968 and starred Adam West as Bruce Wayne/Batman and Burt Ward as Dick Grayson/Robin, is finally going to be released as a DVD set later this year, according to Warner Brothers Home Entertainment.

I was 10 ½ years old and a huge comic book fan when the TV series debuted in January of 1966 and I immediately loved the show. By the time the series ended 3 years later I was beginning to grow tired of the campiness, though the addition of Batgirl in the last season was a welcome addition to a young teenage boy. 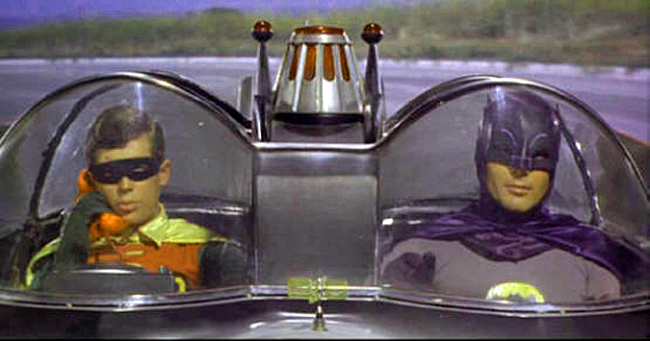 Almost 25 years ago, when the Tim Burton film version of Batman starring Michael Keaton was about to be released, one of the cable networks, I believe it might have been USA, began rerunning the old Batman TV series as part of a marketing plan to take advantage of the tremendous amount of hype surrounding the upcoming movie. I told my then 10 year old son that we HAD to watch the reruns together so he could see what I loved when I was his age. He agreed and for weeks I kept telling him how much fun the show was and how great it would be to watch it together.

The night the first rerun show was aired we sat down on the couch to watch it…and it was hugely disappointing. I sat there through the first ½ hour show wondering WHAT I had seen in the show and WHY I had thought this would be such a great idea. I imagine he was thinking something similar, since a 10 year old in 1989 had much more sophisticated TV fare and characters to occupy their entertainment needs. We turned off the TV and never watched another episode. Obviously, my 10 year old inner child wasn’t manifesting himself.

Even so, I would still love to have these shows on DVD, if for no other reason than to occasionally look back and maybe laugh and shake my head at what I found so entrancing. Plus, since most of the main stars are still alive, I would hope that the DVD’s would include lots of extras and cast commentary, and maybe some comparisons on how the comics and the TV show influenced each other.

And, I have to admit I still have a soft spot in my memory for all the hours of entertainment the show gave me as a child. Maybe I can find it again.