Back At Wolf’s Haven

We arrived back at Wolf’s Haven and our mountain cabin just about 24 hours ago and it has felt satisfying to be doing things to bring the cabin “back to life”, even for the short amount of time we’ll be spending here and even if that means disposing of a dead body (a mouse was dead on a box in the basement) following Cindy’s screams of discovery. 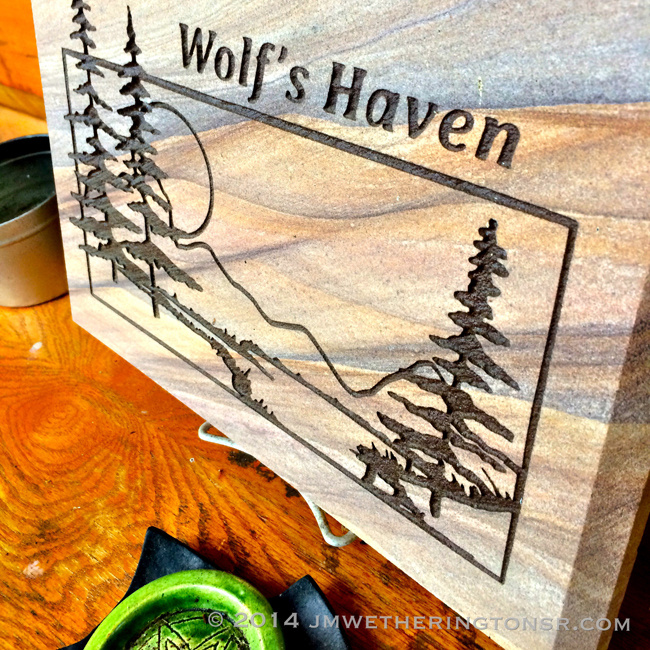 Wolf’s Haven plaque on our deck.

We had a good drive up, for the most part, leaving Orlando in the inky darkness of early morning at 4:50 am. We made several rest stop breaks so that Bella could relieve herself. She is the sweetest, most well-behaved dog I have ever known, but road trips are not her favorite activity and they cause her stress and stomach problems. We can’t even feed her breakfast before departing because she just regurgitates it back to us later on the car seat. But otherwise she does very well and has to wait until we arrive to eat.

There was one hair-raising incident about three fourths into our trip, and here is how I described it to my friend Kathy in an email this morning:

Yesterday we were about 30 miles south of Spartanburg and I was in the left hand lane going around a guy towing a trailer. Just as I got even with him he started moving over into my lane! I laid on the horn while screaming expletives at him and had to move about a foot onto the shoulder (and they’re not very wide at that point) and thought “Well, we’re going to hit each other because I’m NOT taking us into the trees if I can help it” and he finally moved back over when he was about 6 inches (it looked like, lol) from hitting our car. Cindy was right next to him at her window and said it looked like he just woke up and realized we were there, the way his eyes and face looked. Then she said he was giving us a dirty look!

That had my blood racing for a while, lol. 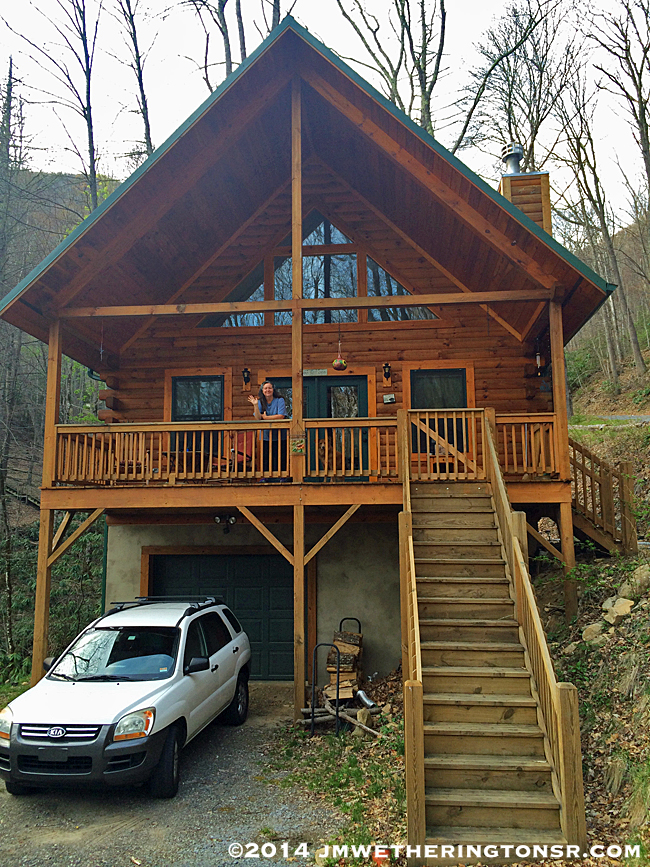 We stopped at the Ingles grocery store in Waynesville before coming up the mountain to our cabin to pick up a few food items for breakfast, and then arrived at Wolf’s Haven around 4pm. After unloading most of the car (we left some items that were not needed immediately for today) we did a little unpacking, checked to make sure the DirectTV was back on and scheduled it to record last night’s repeat of the latest Game of Thrones episode, ate a sandwich for dinner, turned on the electric blanket on the bed (it was 58 in the cabin), watched an old “Bones” episode and then, bed nicely warmed, climbed into it and slept soundly for about 9 hours. 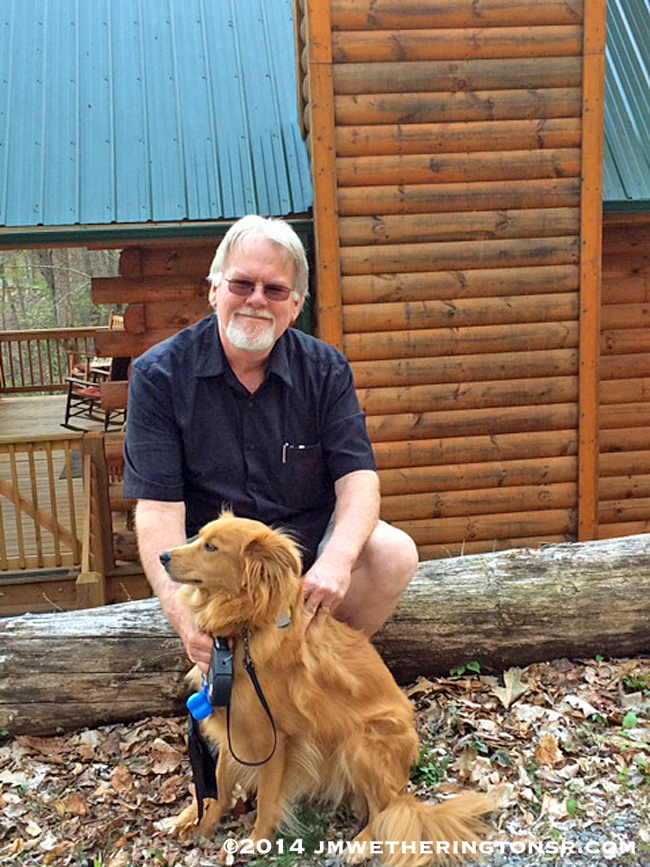 Bella and I before we took a walk on the nearby mountain roads.

One thing that was interesting was that shortly after we arrived we noticed Bella was walking all around the cabin, sniffing around the main level, then going upstairs to the master bedroom loft, then back down the stairs and starting all over again, seemingly searching through all the rooms. We were pretty much occupied with  unloading and unpacking and did not pay it a great deal of attention, thinking that she was picking up the scent of Cindy’s brother and his family who had been staying at the cabin a few weeks earlier. But then, as we were sitting on the couch for a few minutes, Bella began a soft whimpering as she was moving about the cabin and that definitely got our attention. After watching her for a few minutes as she sniffed and looked around the main level and then went back upstairs, all the while kind of whining, it occurred to me that she was looking for Tigger!

These road trips are even harder on Tigger and since this was a relatively quick up and back trip we decided to leave him in relative cat-comfort with my step-daughter. This is the first time in her entire life that Bella has been here at the cabin without Tigger and, if I know my dog behavior, she was very much missing his feline face where she expected to see it. Fortunately, she seems to have made peace with his absence and has stopped searching for him and whimpering. 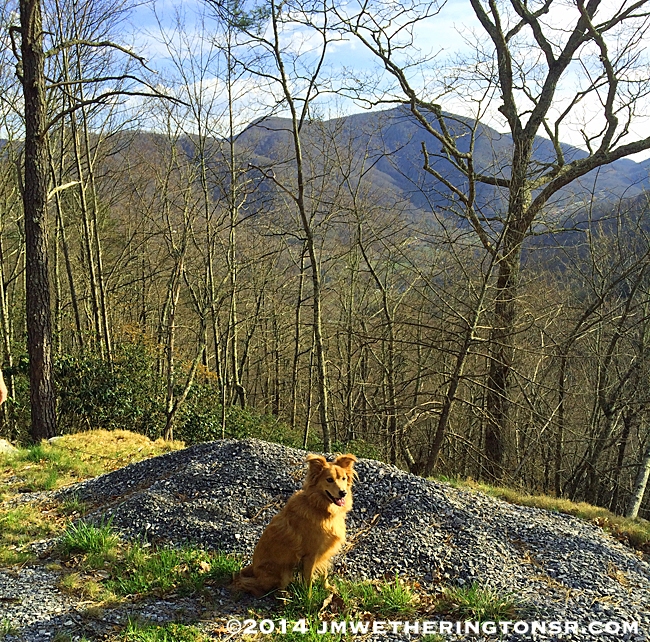 Bella sitting pretty on one of the roads above our cabin looking toward another mountain.

Today we spent a little time at Blue Ridge Books in Waynesville. We went around mid-morning and I was very  much looking forward to a Strawberry-Mango Smoothie from their cafe as a snack between breakfast and lunch while we used their wi-fi for some large file downloading and browsed their book and magazine shelves. Sadly, while we gone these past 5 months, their accountant informed them that the cafe was losing entirely too much money and the decision was made to eliminate that part of the business. I completely understand, but was still disappointed because their smoothies were really good! 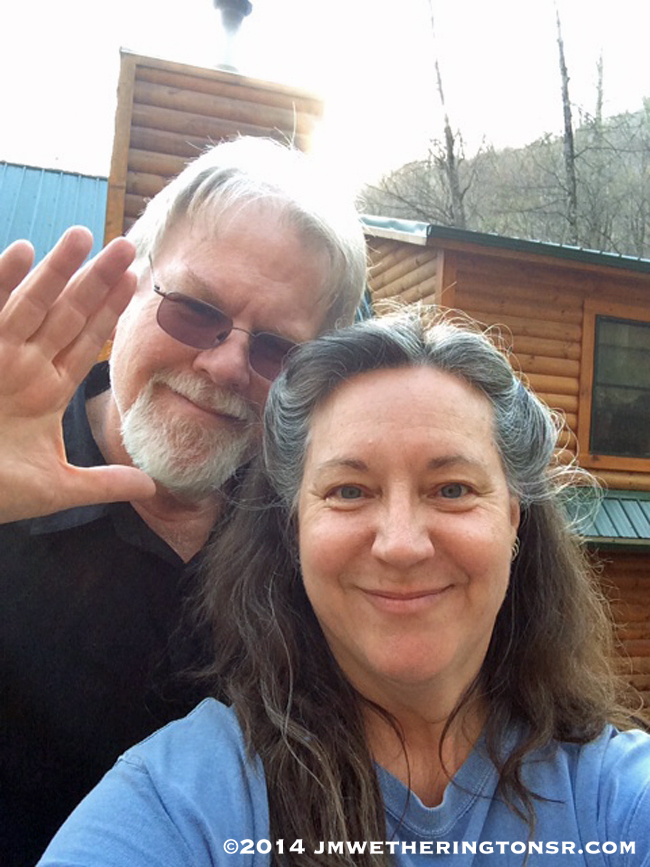 This is our “selfie” that Abby asked us for when we were talking to her on the phone.

Afterward we went to the grocery store to buy what will hopefully be enough groceries for the next 19 days, came back and put them away and then indulged in a nap. It is so peaceful here that it is easy to relax.

Tomorrow we start working around here. We have some cleaning up to do in the basement and around the outside of the cabin (we had a mini-landslide on one side near the road and a rather large rock that rolled down from above near our driveway), plus while it is warm I will be going down to the creek and clearing out some fallen trees and buildup of growth that is blocking one arm of the creek that flows on our property.

My apologies for this long post as I tried to catch up on the past few days.