The month of April has been designated National Autism Awareness Month (World Autism Awareness Day is recognized on April 2nd each year) and awareness of this increasingly prevalent diagnosis is an important aspect of addressing the needs of those on the autism spectrum.

Last week the Centers for Disease Control released new study data showing that 1 in 68 children has an autism spectrum disorder (I dislike that word), which is a 30% increase since the last study in 2008 when the rate was 1 in 88.

That rate works out to 14.7 children per 1,000 8-year-olds, the CDC said. The data shows that autism spectrum disorders are nearly five times more common in boys than girls, and more common in white children compared to African-American or Hispanic children. There is still no definitive cause for the spectrum occurrences.

It’s important to mention again that building awareness is at the forefront of this observation each April. I used to be one of those who thought or even sometimes made statements like, “The parents need to teach that kid how to behave” or “Can’t they control that bratty kid?” and other unkind and uninformed declarations. 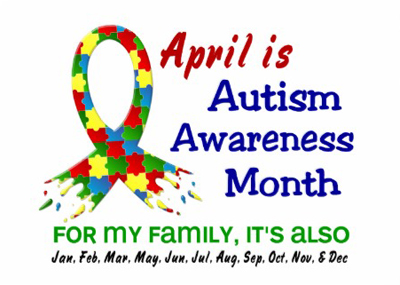 But when my oldest grandson Mikey was diagnosed as being on the autism spectrum at about 18 months of age (I credit early diagnosis and intervention, along with his fantastic mother, with the amazing progress Mikey has exhibited through the years), I began my education about autism behaviors, especially those of Asperger’s Syndrome which is where Mikey was placed on the spectrum around the age of 4 or 5. Asperger’s children (and adults), or “Aspies” are on the higher functioning end of the spectrum and, while quite intelligent, have a higher than normal level of difficulty in social situations and recognizing many of the spoken, facial and/or body language cues that we all exhibit, and can display some obsessive compulsive behaviors. Mikey’s mom, contributed greatly to my education as well and kept me informed (when I could not attend myself) on the results of all of Mikey’s appointments and the things that she was learning about the spectrum. 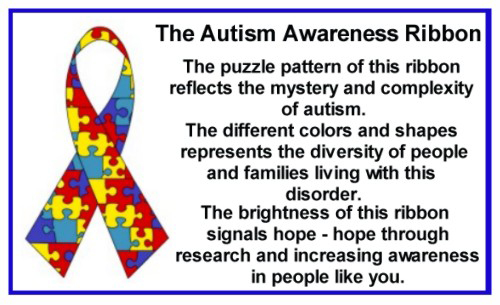 That education helped me become so much more aware of and understanding of behaviors that previously would have aggravated me. And not only in children. Early on, it became obvious to me that one of my co-workers, a grown man with his own business, displayed all the classic behaviors of someone who would be placed on the Asperger’s portion of the spectrum. Since then I have observed at least 3 other adult co-workers that also would fit that description. What I have learned has helped me be much more understanding of behaviors that others would (and do) classify as being “weird” or “strange” because they are not aware of the autism spectrum.

So I hope you’ll use this month of April, especially, to increase your awareness of autism and your understanding of those on the spectrum.