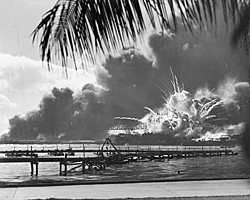 On this date in 1941, American naval forces at Pearl Harbor in Oahu, Hawaii were attacked by the Imperial Japanese Navy, and was described by President Roosevelt the following day in his Presidential Address to Congress and the American people as “a date which will live in infamy.”

All eight U.S. Navy battleships docked at the harbor were damaged with four of them being sunk. The Japanese also sank or damaged three cruisers, three destroyers, an anti-aircraft training ship and one minelayer ship. A total of 188 U.S. aircraft were destroyed. Most heartbreaking is that 2,402 Americans were killed and 1, 282 were wounded. 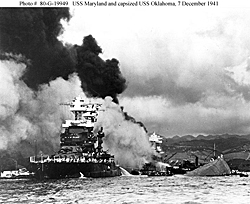 Scouring my news feeds this morning, I am saddened to find no references to the historical events of this day 72 years ago. I suppose it has something to do with the fact that a majority of Americans living today were not even alive that day, but I would still expect that a collective memory would exist, or at least a historical one. Those who gave their lives as a result of the attack that day deserve our memorializing of their sacrifice, at the very least.

I wonder if this is what it will be like 72 years after the 9/11 attacks. We say “Never Forget” about that day as Roosevelt said, “a date which will live in infamy.” about December 7th, but it seems that may not be the case.

All honor and respect to those who gave their lives in service to our country that day. Your sacrifice will never be forgotten.