It’s day three of our 21st Wedding Anniversary Week where we take a day trip to the City of Vancouver.

So this day, March 30th, is the actual day of our 21st wedding anniversary and I like to try and do something a little extra on the day we’re observing our anniversary. A few months back when we were planning the week, I asked Cindy if she’d like to drive up to Vancouver to spend the day touring the city and she agreed that it sounded like a fun way to spend the day.

We left the hotel in Redmond at 5 am for the approximately 2 ½ hour drive. Our usual practice when visiting a large city for the first time is to take one of the city bus tours offered in order to familiarize ourselves with the history, landmarks, and layout of the city first, and then concentrate on the particular places of interest to us. The tour we chose began at the Vancouver Public Library at 9 am and we knew we’d be stopping for some breakfast along the way on the drive so we built in enough time for that and the possibility of delays crossing the border.

We needn’t have worried about the border crossing. We were the only car going into Canada, although the line coming out of Canada on the opposite side was a mile long. The border crossing patrol officer took our passports and asked the usual questions about why we were coming to visit Canada and how long we would be staying, asked us if we had more than $10,000 in the car with us (hah!), and within 2 minutes we were on our way into the Great White North. 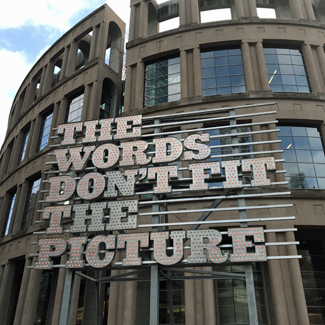 The Vancouver Public Library is a city block in size and we, of course, ended up on the wrong (back) side of it when we arrived and parked. But after a couple of calls to the tour bus company, we were able to find out we needed to be on the front side which is marked, I was told, by “The Words Don’t Fit The Picture” sign, which made no sense when she was telling me this over the phone until I saw the “sign” which is actually artwork.

Since we had some extra time, we used our phone apps to locate a Tim Horton’s Donut Shop and it turned out there was one a half block down the street. My first (and only, at the time) visit to a Tim Horton’s was back in 2011 when I did a day trip to Winnipeg, and I definitely wanted Cindy to experience the goodness while we were in Vancouver. We each got a donut and a hot beverage (guys, I love your donuts but your hot chocolate is pretty gross) and though Cindy liked her’s she opined that it “might be just a little TOO sweet” as we sat and watched the tour bus stop area through the window.

The tour bus arrived at the appointed time and we boarded. I’d say that this turned out to be one of the worst, in my opinion, city tour bus operations we’ve ever been on and probably tied with our New Orleans tour bus ride as the worst ever. It was definitely not worth the money or the time spent.

After the tour we returned to our car, fed some more money into the parking meter and walked around in search of a place to eat lunch. We found an Irish Pub named Dublin Calling and ate entirely too much food. It was a good thing we planned to do some walking around the city!

Anyway, below are some photos we took during the day.

The image on the side of the Randall Building, at 535 West Georgia, was installed in 1993 and is one of the city’s most photographed buildings. The mural is based on a copper engraving from 1698 by German Christopher Weigel (1654-1725). It shows a master goldsmith instructing apprentices. 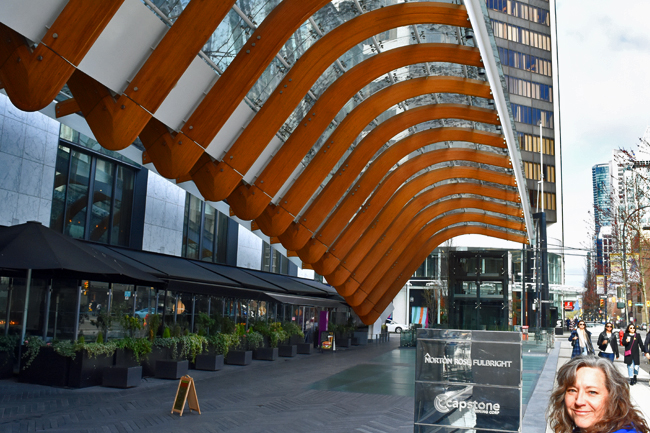 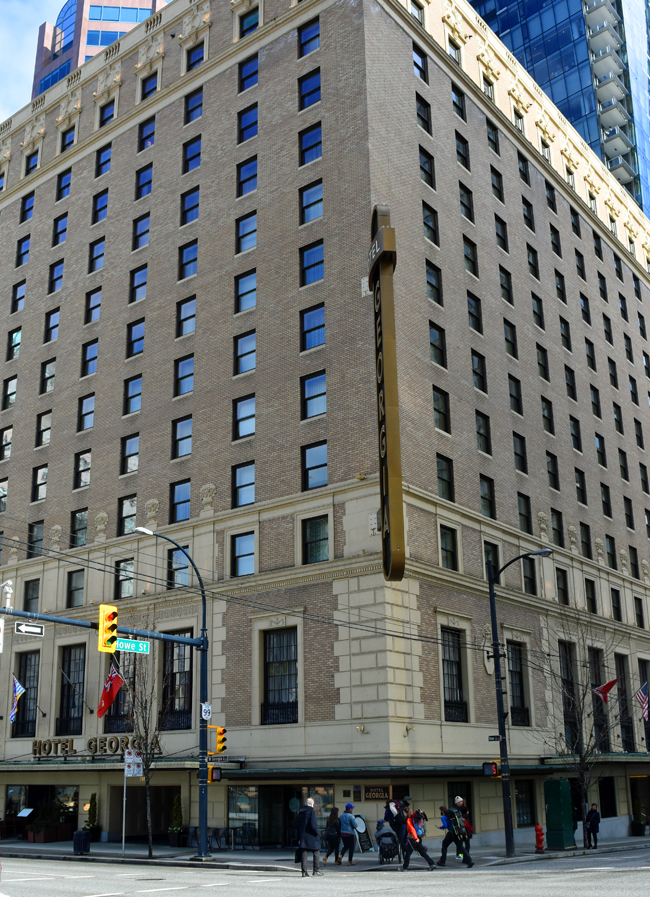 The world-renowned Rosewood Hotel Georgia in Vancouver where celebrities and royalty such as Elvis Presley, Nat King Cole, Louis Armstrong, Queen Elizabeth II and Prince Philip, John Wayne, and the Prince of Wales have stayed. 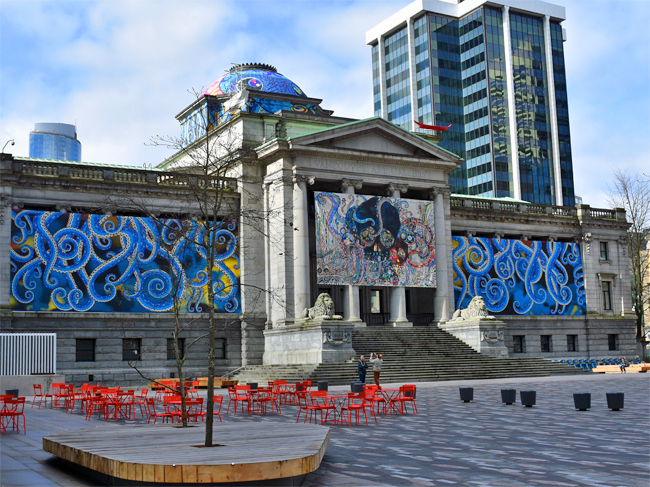 The Vancouver Museum of Art entrance. 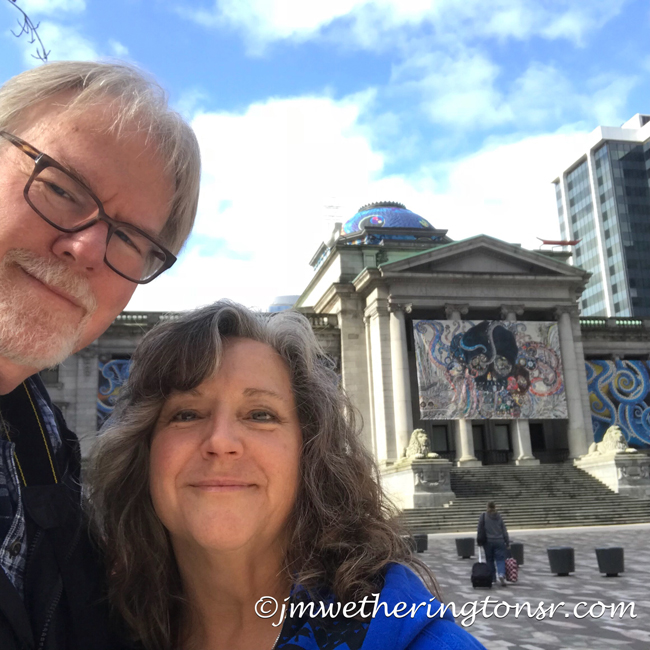 Cindy and I doing a selfie in front of the Vancouver Museum of Art. 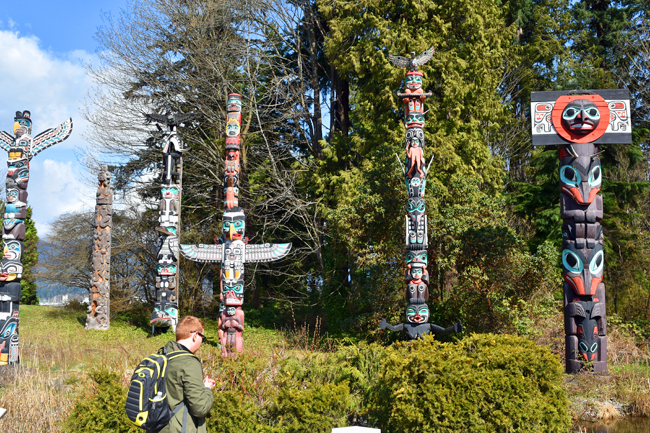 The Totems at Stanley Park in Vancouver. 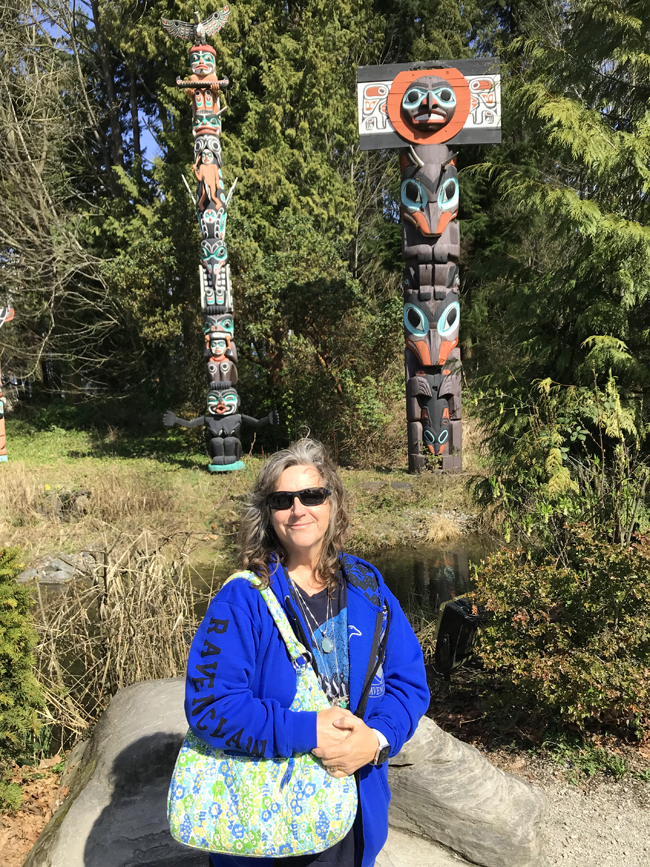 Cindy in front of the Totems at Stanley Park in Vancouver.

Cindy standing on the shore of Stanley Park with the Vancouver skyline across the bay behind her. 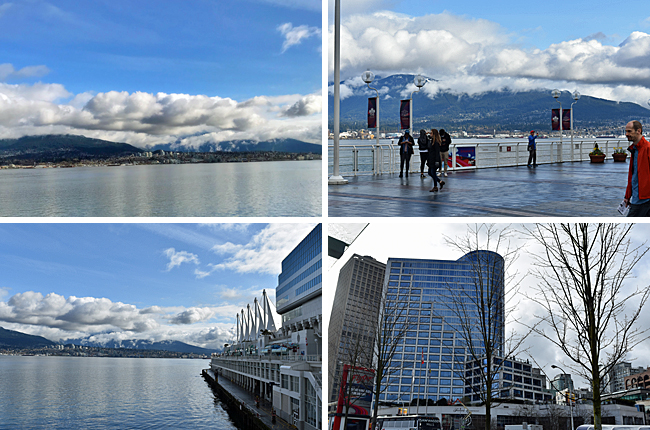 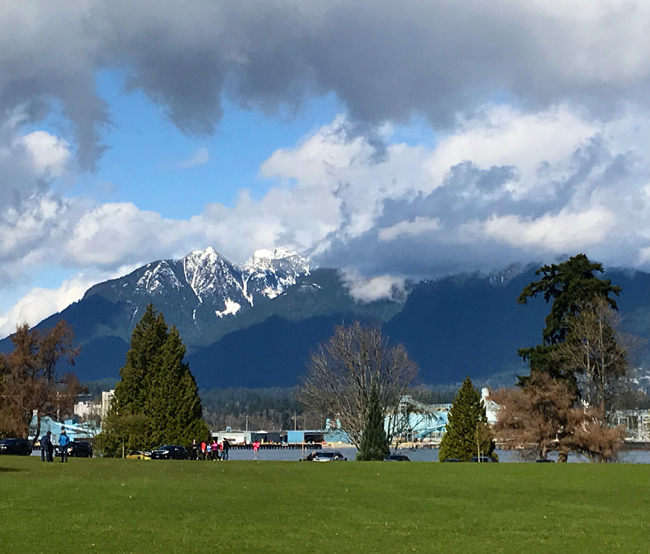 Mountains across the bay on the opposite shore of Stanley Park. 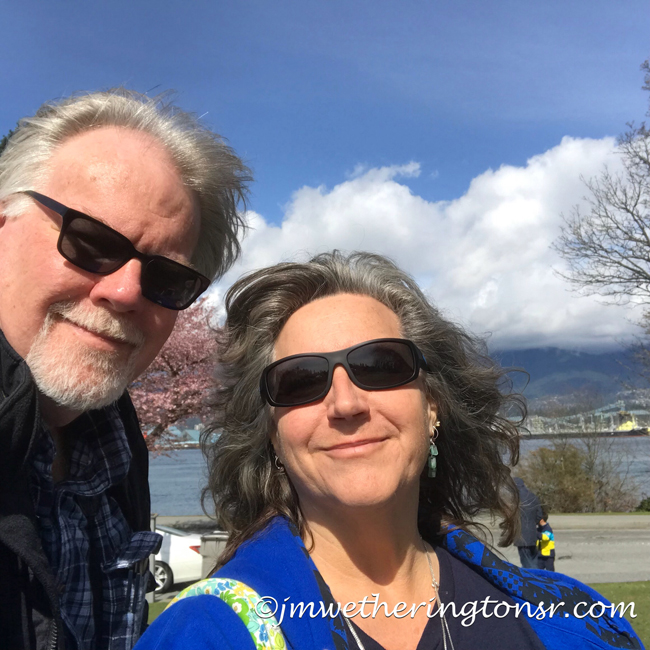 Selfie of Cindy and I with the mountains across the bay on the opposite shore of Stanley Park.

Here’s a video taken from the shore of Stanley Park across the bay from the City of Vancouver.

We finished our visit to Vancouver by stopping and buying a dozen Tim Horton donuts to take back to Redmond with us and then spent an hour and 15 minutes waiting in traffic at the border to get through the crossing.

Hoping for another good night’s sleep because tomorrow we drive to the West in order to see the Pacific Ocean for the first time.