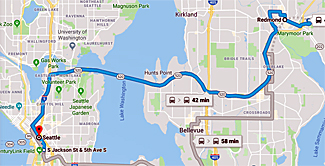 After breakfast at the hotel, Cindy and I drove over to Jeremy and Wendy’s house to pick up Jade and Maxwell for our trip to Seattle and our visit to Underground Seattle.

Seattle and the surrounding metropolitan areas have an awesome mass transit system of buses and trains. In fact, there’s a bus route that goes from Redmond to downtown Seattle, getting you there in about 40-45 minutes. Jeremy and Wendy lent us their transit passes (shhh), Jade had her own and Maxwell didn’t need one, so we were all set. We drove down to the Redmond Transit Center, parked our rental car across the street at the free parking garage and timed it so we only waited about 5 minutes for the next bus to arrive.

The bus was an articulated model, like the one pictured here. I have some advice for you, should you ever find yourself on this type of bus. Even though there are seats (nicely arranged so that they face each other across the aisle that runs down the middle of the bus) in that accordion-like section you see in the photo, DON’T sit in them!

Number one; when the first half of the bus is full (and sometimes even when it isn’t) people who are going to sit in the second car have to walk past you. If you’re long-legged like yours truly, it’s an effort to pull them in enough to avoid being bumped into by those folks. It’s aggravating.

Number two; the seats in that accordion-like section do not “ride” like the rest of the seats in the bus and so you may, MAY find yourself experiencing symptoms of motion sickness to a degree that will make you, shall we say, uncomfortable.

Number three; you may find yourself experiencing the totally illogical fear that the bus, when making sharp turns which bend the articulated vehicle in half, will rip open and spill you and your loved ones out onto the road and into traffic, where you and they will surely experience severe bodily injury and perhaps worse.

Ride in the “normal” section of the bus. You’ll thank me for it later.

We arrived at the stop closest to the official Bill Speidel’s Underground Tour (they were the originators of the underground tour and have been doing them since 1965) entrance and staggered the five or six blocks of rolling downtown streets to get there. Well, Cindy and I staggered, the grandkids are young and they did fine.

This is just a building with fire escape stairs that caught my eye as we were walking to the Underground Seattle Tour. 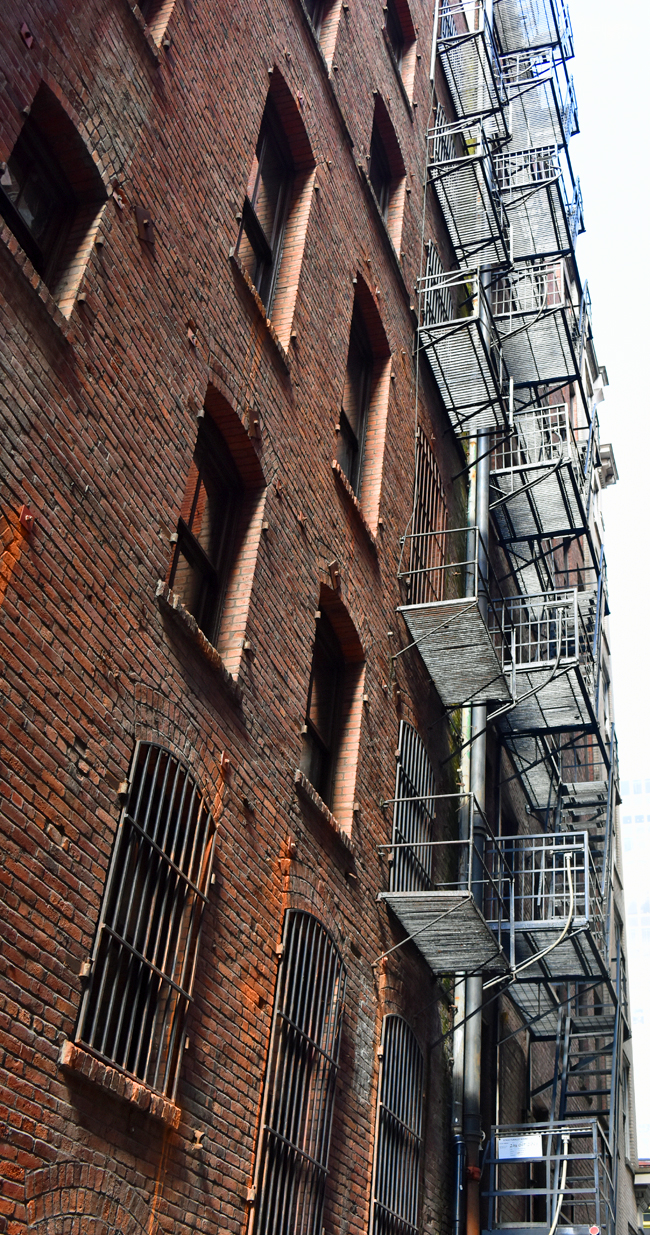 After waiting with about 100 other people while the Underground Seattle tour conductors told bad jokes and pitched their books for 25 minutes, we finally got started on our two-hour tour (minus those 25 minutes) with a tour conductor and 30-35 people in our group.

Now, you might think an underground tour would get started underground, but you would think wrong. We had to go out to an alley on the street level and cross sidewalks and traffic to get to our first underground destination, so another 10 minutes of the two-hour tour.

You can probably tell by now that I was not impressed. But my youngest granddaughter loves this tour, so granddad “loves” it too and is happy that he’s spending time with his wife and youngest grandchildren.

So, here we are at the first Seattle Underground stop. These folks look happy, don’t they? Anyway, if you look at the old photo on the wall it shows what the area we’re standing in looked like when it was originally at street level back in the mid-19th century Seattle. 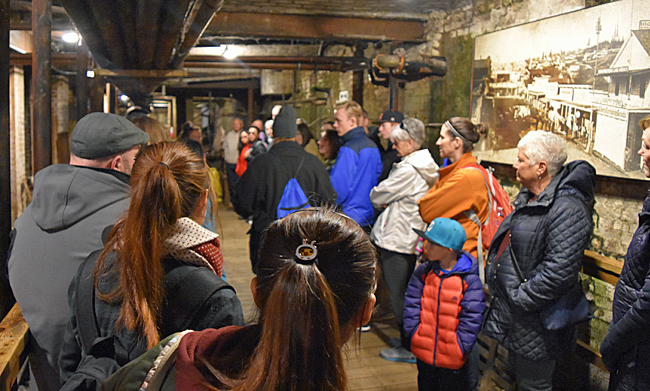 Now, I will say that our tour guide had lots of interesting and amusing stories of the time when all of this was at street level and how it came to be underground. My lack of impression with the tour was the shortness of time and the low number of underground places we actually visited during the advertised two-hour tour. But our tour guide; she did good and even dressed in the style of the period somewhat. I think.

When Seattle city leaders decided to raise the street level, most businesses still had entrances where they had always been but were now underground. To provide light, these sections of clear glass (which came to be known as pavement lights) were installed on the sidewalk area. The glass was clear as in translucent, but made like, say, the glass of your shower stall so it wasn’t transparent in the sense that you could see through it, but allowed daylight to illuminate the entrances and walkways below ground. Over time, the aging process made some of the glass amethyst-colored, which is attractive and decorative as well.

And here’s an above ground view of the pavement lights on the street today. 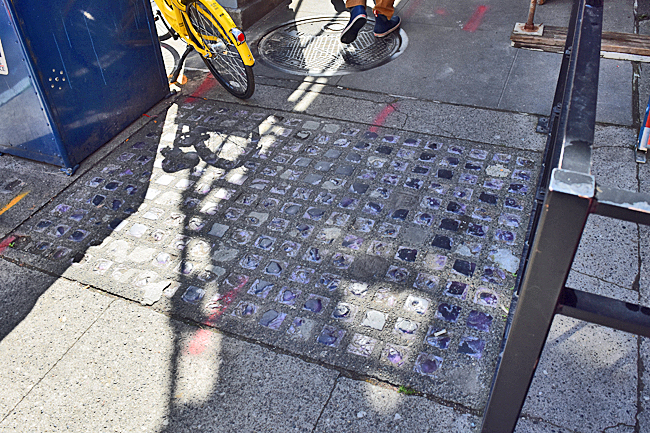 If I’m not misremembering, this area was a speakeasy and a house of ill-repute. There were lots of little alcoves around the outer edges, but we couldn’t get into those. 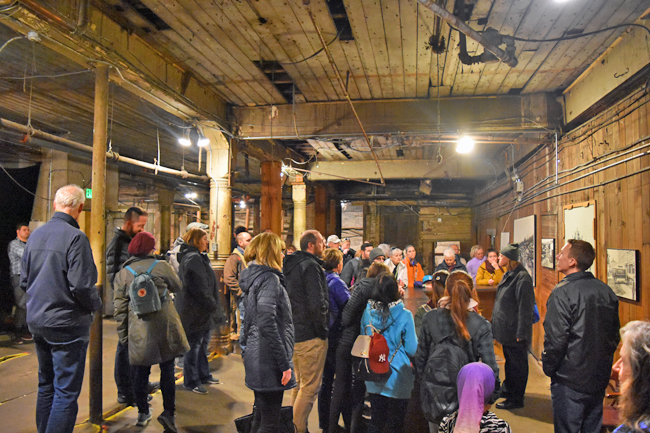 And here is a bathroom just off the main room. Seeing that toilet seat reminded me of a memory I’d forgotten about. When I was young, not older than 8, my parents and I went somewhere (I don’t remember where) where the bathroom had a wooden toilet seat constructed like this one, only not falling apart in pieces. I remember it because the first time I sat on it I expected it to be like the toilet seat in our home, plastic or whatever they made them out of back then. But, like the one in this photo, the seat had seams on the right and left that joined to the curved open section. When I sat down on it, I didn’t realize that my weight caused the seam on my left to separate slightly, but I sure realized it when I started to stand up and the lack of weight cause the seam to push back together, pinching my ass and the back of my thigh in the process! YOW!!! 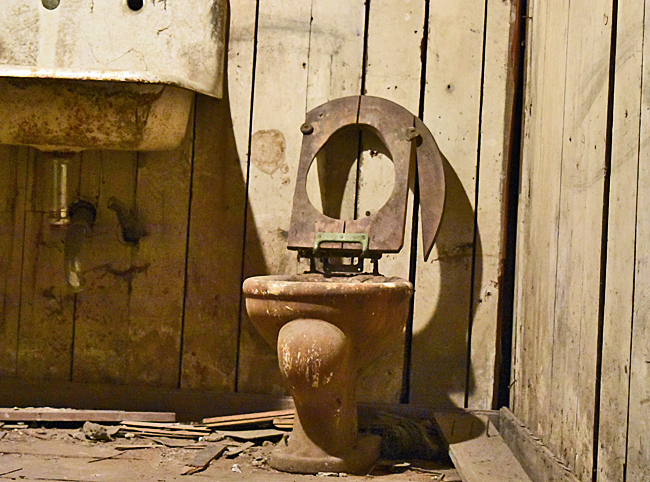 Here’s the photo of ourselves that we bought in the Underground Seattle gift shop. 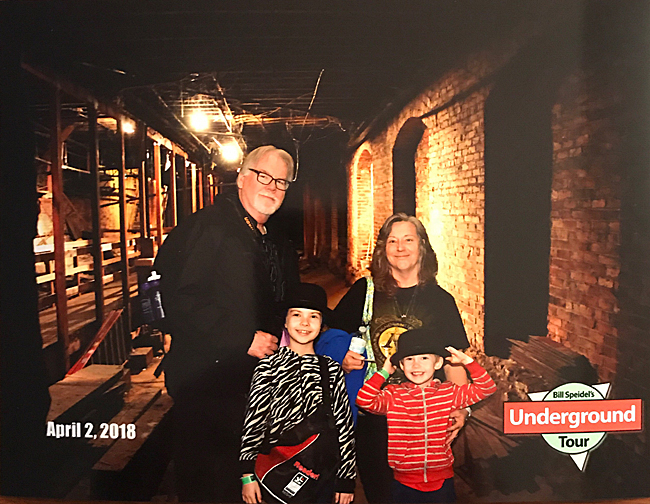 After finishing the Underground Seattle tour, we walked a few blocks over to Shawn O’Donnell’s for lunch. The food was good, the company (as you can see on the left) was great, and Maxwell loved his smiley fries. 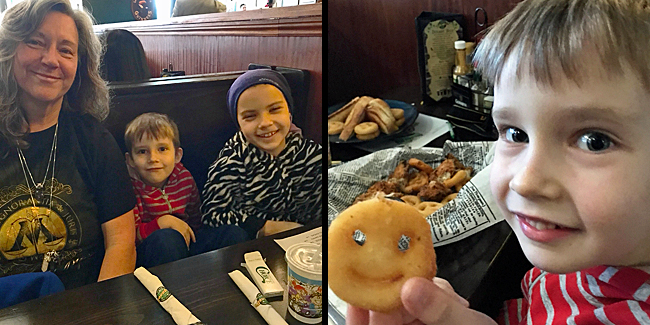 We took the bus back to Redmond, drove over to Half-Price Books where Jade and Maxwell each picked out a book (maybe two?, lol) and then we visited the Stone Cold Creamery for some ice cream before returning to our hotel for what was supposed to be a nap before dinner but ended up being playtime for us instead.

Hey, it’s not every day you get to see your grandkids so you gotta make the most of it!

One more day of our 21st wedding anniversary week is all that’s left before we have to take our leave.