It’s day one of our 21st Wedding Anniversary Week where we fly to Seattle, Washington and visit the Museum of Pop Culture Star Trek exhibit before driving to Redmond, Washington to visit our children and two youngest grandchildren. 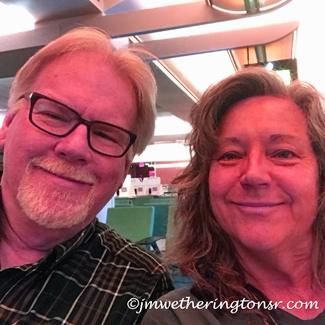 Amber and Abby dropped Cindy and I off at the Orlando International Airport at 5:30 am for our 7:15 am flight. I had just flown in from Austin the day before in time to have dinner with Cindy, Amber, Abby, Ann, and Heather at Chuy’s, so while I would not have wanted to miss getting to see them, I was tired right from the beginning of the trip. As is my usual custom (though not my choice), I had not slept much the night before, and I had not slept much the night before my flight to Austin, so I was going on little sleep over the previous 2 nights. Thank goodness we were able to book a non-stop flight so I might have the chance to doze a bit during the flight.

We checked our bags, sailed through TSA with our precheck status (worth every penny when you fly as often as I do, especially out of airports as busy as OIA) and soon were out at the terminal where our gate was located. Even though our flight included a breakfast, I knew it would be 3 hours or so before we even smelled the in-flight meal, so we endured standing in a hellaciously long line at Starbucks to get a couple of breakfast sandwiches and beverages to hold us over. And, before you could say “Now boarding” we were on the plane and settling into our seats.

Being the gentleman that I am, I gave up the coveted window seat to my beautiful wife, so she would not have to sit in the middle seat, which is never any fun. Cindy, in turn, was kind enough to let me place my backpack under the seat in front of her so that I had more room to stretch out my legs.

We had both brought our iPads with movies and our iPhones with music, but the flight offered a nice variety of movies, TV shows, and music on the seatback screens in front of each of us and we each found something to watch, only to realize that Cindy did not have her earbuds with the round plugin that the plane system jack used (as opposed to the flat one that our phones and tablets use), so I gave her mine while I listened to music on my iPhone.

An hour and a half into the flight our breakfast arrived. Mine is on the left and you can see I chose another breakfast sandwich with fresh fruit while Cindy chose the cheese assortment with grapes and nuts, but what she really wanted was the Ghirardelli chocolate square that came with it. As an airline meal goes it wasn’t bad, but I was really glad we’d had a first breakfast, as the Hobbits say, earlier.

We landed in Seattle at approximately 10:30 am local time, got our baggage, picked up our mid-size sedan from the rental car company, and headed to our first stop before driving over to Redmond; lunch. You have to remember our stomachs are still on Eastern and Central time zones. We stopped at a Cheesecake Factory and enjoyed the meal as we caught up on talking to each other in person, enjoying being alone together, and going over some local brochures and visitor magazines that Cindy had picked up while I was getting the rental car.

Then we headed to our second stop before driving to Redmond; the Museum of Pop Culture.

I wanted to visit the Museum of Pop Culture because they were offering a Star Trek exhibit and I have been a fan of Star Trek since it debuted more than 50 years ago.

Here we are across the street from the Museum. 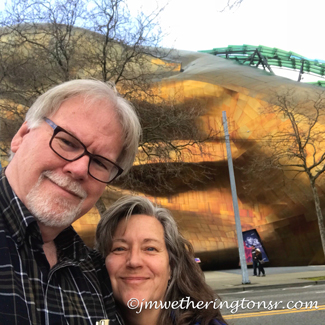 This photo does not adequately show the size and shape of the museum building. If you go to this link you can read about how the architect designed the building and see how big it really is.

“When Frank O. Gehry began designing the museum, he was inspired to create a structure that evoked the rock ‘n’ roll experience. He purchased several electric guitars, sliced them into pieces, and used them as building blocks for an early model design.”

After paying the admission charge, we headed immediately to the Star Trek exhibit. These stairs led you to the second and third levels where you could then make your way back down to the only access to the first level of the exhibit. I thought using the stairs to spell out the opening words of the Original and Next Generation TV series episodes was a nice touch. 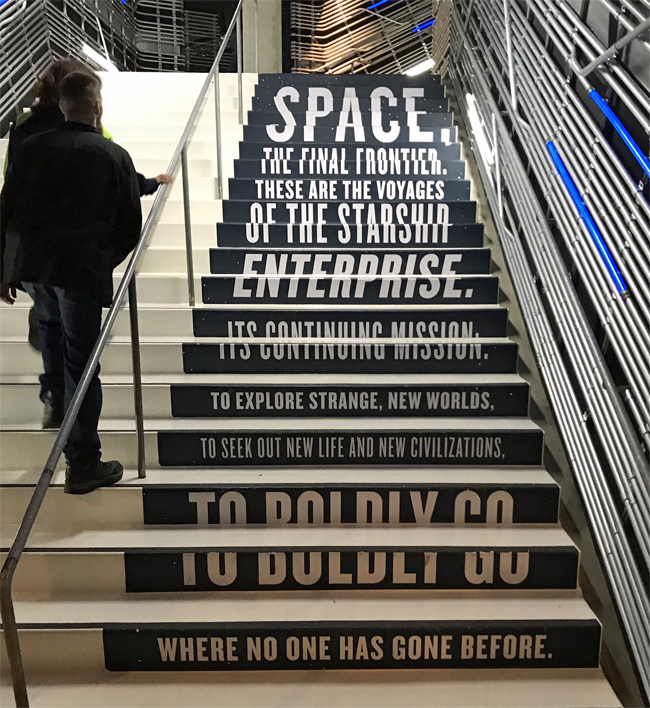 Here I am standing next to the universally recognized emblem of Starfleet. Man, I wish I had my Star Trek uniform with me, lol. 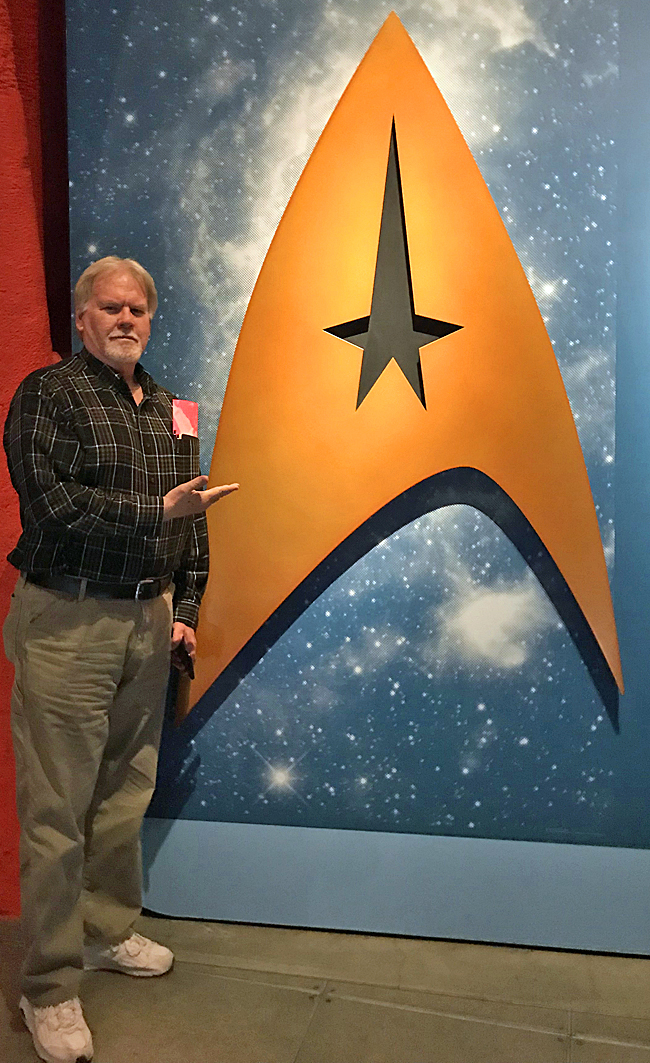 One of the first things we came across was a part of the exhibit where you could insert yourself into a pivotal scene from the 1982 motion picture Star Trek II: The Wrath of Khan and portray still handsome but aging Captain James T. Kirk (extra points to the first person who, without checking Google, leaves a comment telling what the “T” stands for). I’ve got the aging part down pat, so I gave it a try and Cindy recorded a video of it on her phone. Yes, that’s her raucous laughter you hear at the end, and I imagine you will be doing the same.

To set the scene, in case you have not seen this awesome movie, Khan (portrayed by Ricardo Montalban) believes he has trapped Captain Kirk and his landing party inside a planet and intends to leave him there with no chance of escape. Since the other noise in the exhibit made it hard to hear the lines being spoken, I’m putting them below so you’ll know what is being said:

Khan: I shall leave you as you left me, as you left her; marooned for all eternity in the center of a dead planet… buried alive! Buried alive…!

You laugh now but…you’ll laugh even more later in the blog.

Here are some of the Starships in the exhibit. 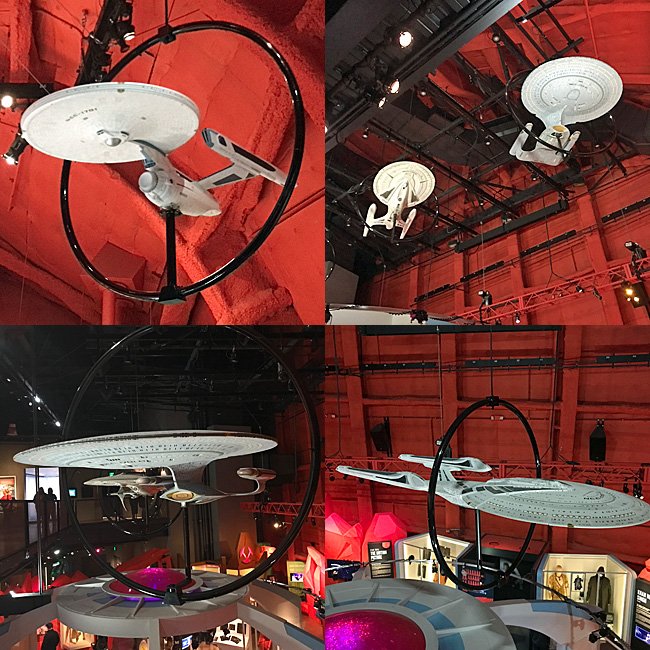 Below on the left is the Gorn costume worn by some poor stuntman who had to fight and sweat in the heat somewhere outside of Hollywood back in 1966 for the original Star Trek series episode “Arena” and on the right is some generic Borg costume from either The Next Generation and/or Voyager series standing beside his Borg regeneration alcove. The Borg mannequin is pretty much a poser because I don’t believe I’ve ever seen a Borg character who stood with his or her hands on their hips like that. Maybe 7 of 9 did later as she lost most of her Borg programming, but that’s about it. 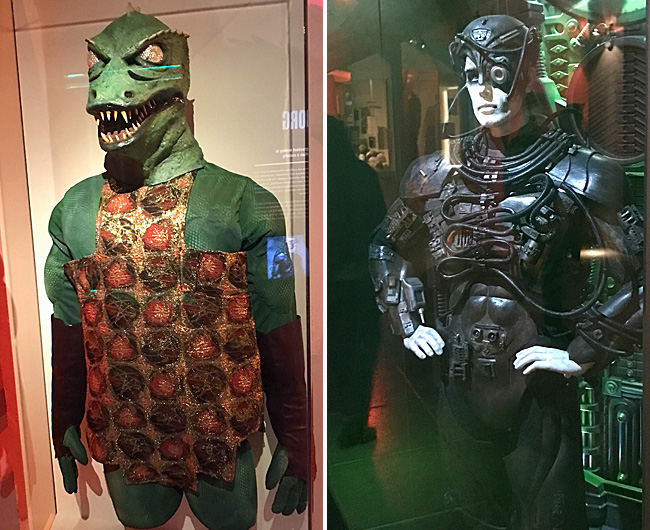 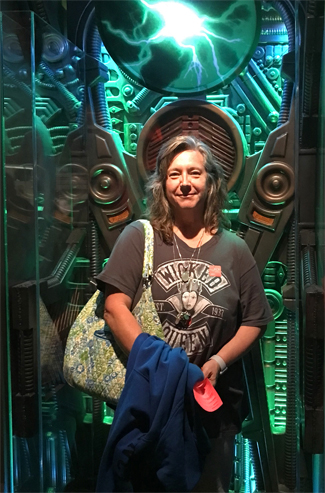 Another fun part of the exhibit used a green-screen stage that allowed you to put yourself into one of three different scenes that involve being transported off the ship to some other location. I chose to do the scene where I’m transported from the ship to a facility on the planet below where I need to use my phaser to destroy a machine that is holding the Enterprise in a tractor beam and then be transported back out before the room comes crashing down on top of me. And once again, I wish I had brought my Star Trek uniform with me.

I promised you that you would laugh even more later, remember?

On the way out they had a wall with a lifesize photo of the crew standing on the bridge behind the captain’s chair. Cindy took two photos of me that you’ll see below. Of course the captain’s chair and myself were originally in color, but i thought it would look better to make everything black and white so it matched. 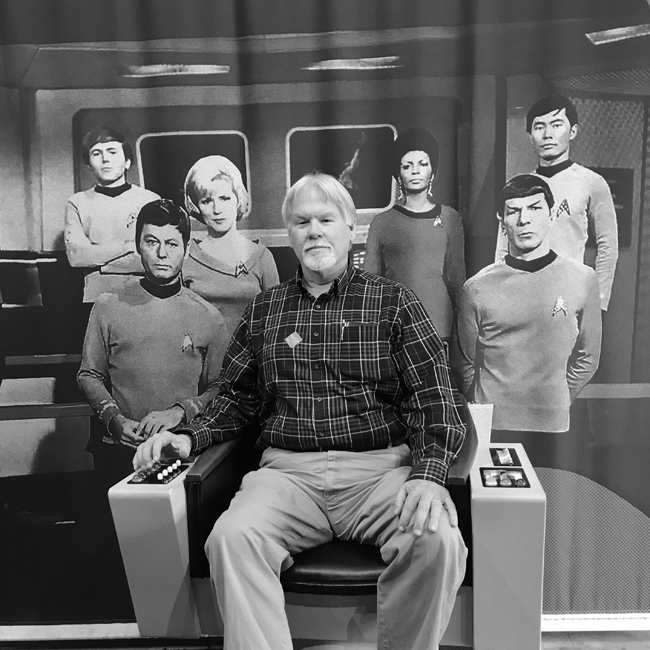 In this second photo, I thought I’d have some fun so I had Cindy shoot me in the pose you see below, and then when I was editing the photo I added the word balloons you see. Again, for both of these shots, I wish I had my Star Trek uniform. 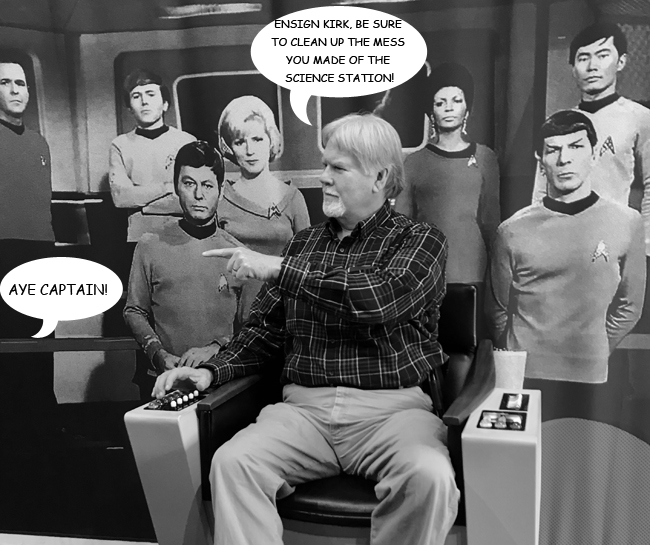 I should make it clear; I don’t really have a Star Trek uniform. I mean, I love the show but I don’t do cosplay. That’s my oldest granddaughter’s talent.

We looked around the rest of the museum (they had a pretty cool magic and fantasy exhibit) bought some souvenirs and then headed over to Redmond to get checked into our hotel room and then meet the kids and grandkids at their home. 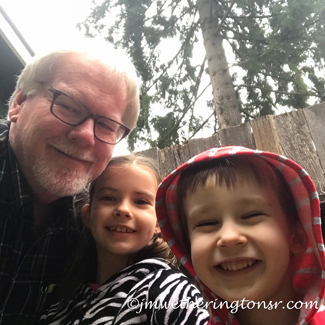 As much as I enjoyed the exhibit at the museum, here’s my favorite part of that day; hanging out with my youngest grandchildren, Jade and Maxwell!

We had dinner with everyone at Fatburger, and then made our way to the hotel for a good night’s sleep. We have a busy day planned tomorrow!