It’s day four of our 21st Wedding Anniversary Week where we take a day trip to Ruby Beach on the West Coast of Washington in the Pacific Northwest. 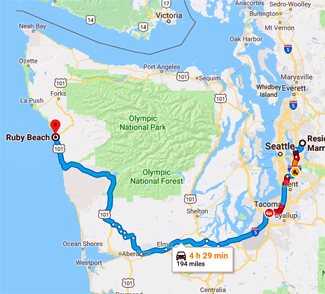 Neither Cindy nor I had ever been to the Pacific Ocean. When we were planning this anniversary week in the Pacific Northwest, we wanted to include a visit to part of the West Coast of Washington that would allow us to see and feel the Pacific Ocean for the first time. We ended up deciding to visit Ruby Beach in the Olympic National Park.

Before leaving the hotel, Cindy and I enjoyed the complimentary breakfast in the lobby area. We were still tired from the trip to Vancouver the day before, so we needed all the help we could get to wake up fully and get filled up before the 4 ½ hour drive to Ruby Beach.

For this day trip on a Saturday, we were being joined by Jeremy, Wendy, Jade, and Maxwell, which made the trip all that much more fun. We needed to take two vehicles to transport everyone, so if I remember correctly Jade rode with Cindy and me on the trip out to Ruby Beach and then Maxwell rode with us on the trip back to Redmond. But, I could have that reversed, lol. Either way, we had a good drive there and back. 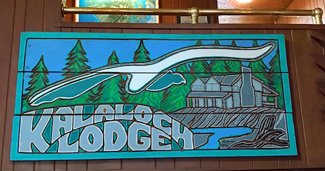 By the time we were approaching Ruby Beach it was lunchtime, so we stopped at the Kalaloch Lodge to eat at their restaurant before finishing the trip to Ruby Beach. We had a delicious meal and enjoyed being out of the cars for 30-45 minutes. Before our food arrived at the table we went out to the back deck facing the Pacific Ocean and got a few photos. Wendy was kind enough to take one of Cindy and me for our album.

In the background of a couple of these photos, you can see drift logs; full-sized tree trunks stripped of most of their branches and deposited on the coastline. It looks like there are a lot of them in these photos, but wait until we get to Ruby Beach. 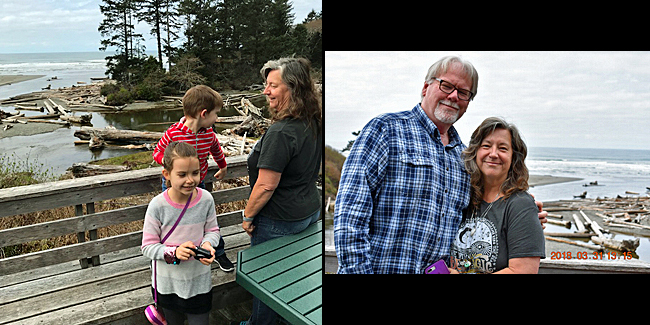 We left Kalaloch and drove a few miles to the entrance of Ruby Beach, parking our cars and walking down the trail to the beach. The kids brought their pails for collecting all kinds of treasures. 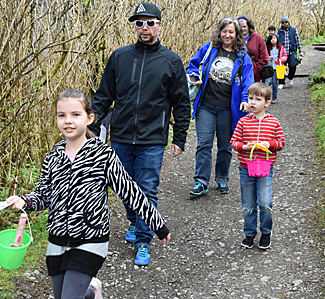 I don’t know who those people behind Wendy are, but they followed us all around the beach, lol.

Standing at the end of the trail, you can see the drift logs piled up on the beach and those rock formations called sea stacks. 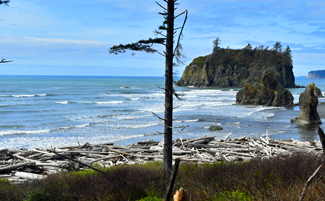 Cindy has a smile on her face, but what’s she’s thinking is, “There’s no way in hell I’m climbing over those drift logs to get to the beach!” 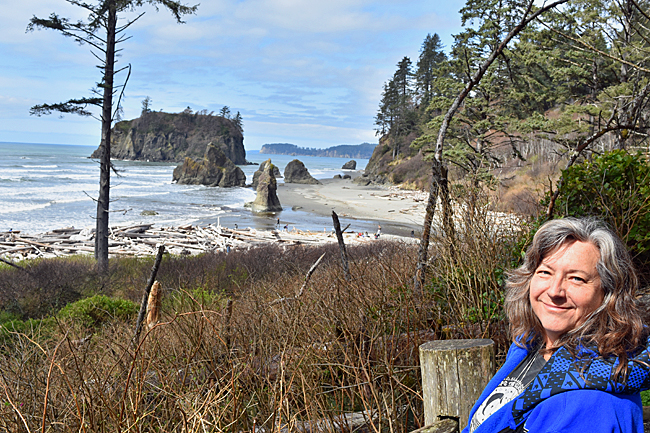 Those drift logs don’t look so bad from the top of the trail; just some small driftwood to step over, right? Afraid not. Here’s a ground level photo to show you what we had to climb over to get to the beach. I’m getting way to old for this kind of stuff. 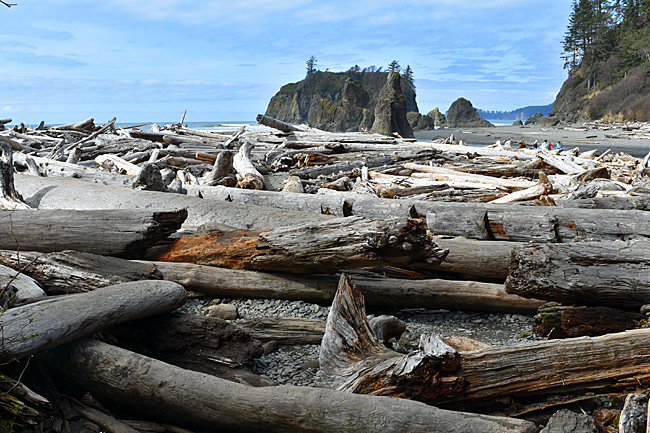 The kids and grandkids had, of course, no trouble whatsoever scaling these full-sized tree trunks that, in some places, were stacked four feet high. Ah, to be young again! 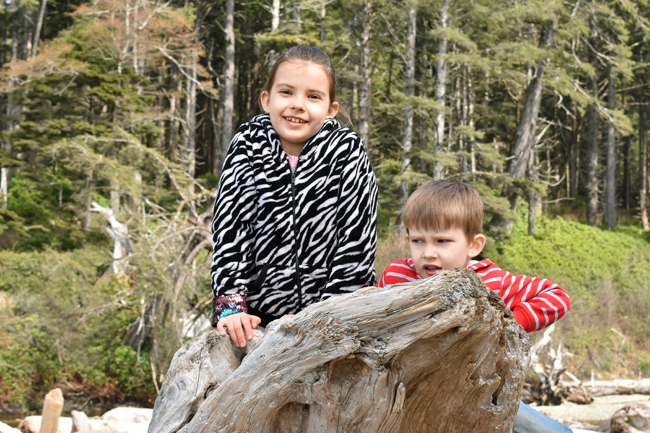 I love this photo of Cindy with the waves of the Pacific Ocean in the background, commemorating her first visit to the West Coast and Pacific Ocean. 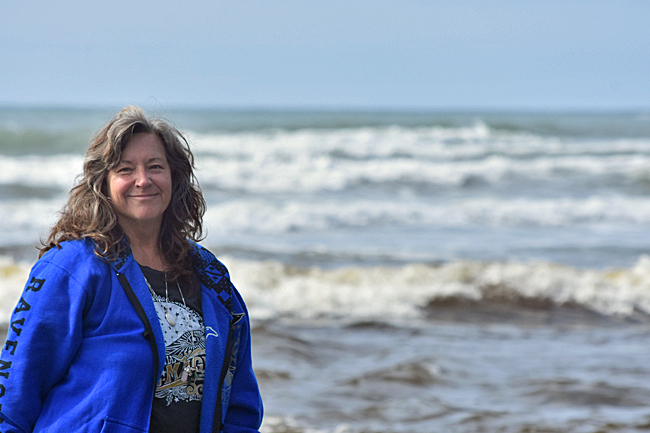 Poor Cindy and Maxwell, they misjudged how fast and how far the waves would come in as they stood on the beach and had to scramble to get out of the water before it went higher than their ankles, lol! 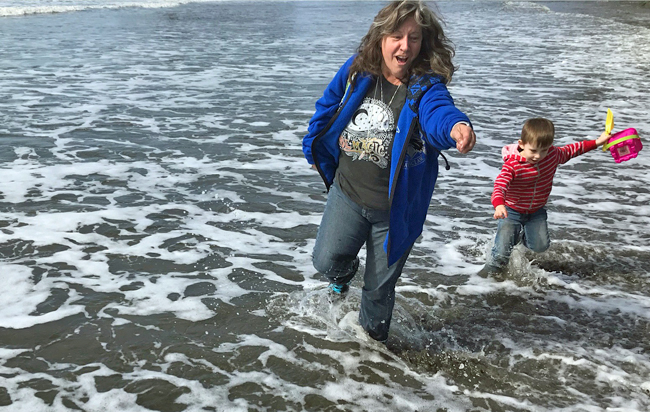 Jeremy, Wendy, Jade, and Maxwell on Ruby Beach with the sea stacks behind them. 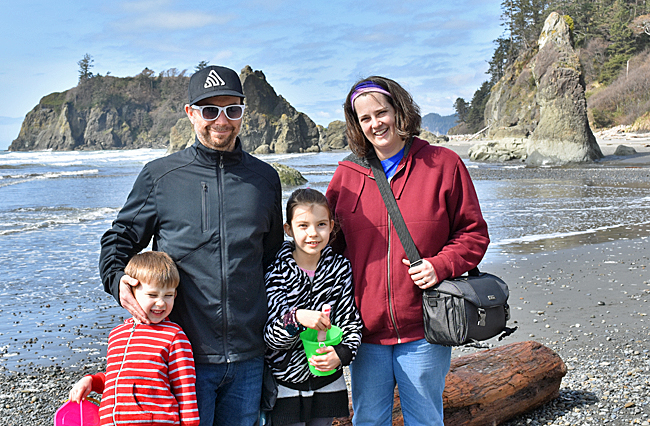 All of us walking along Ruby Beach. 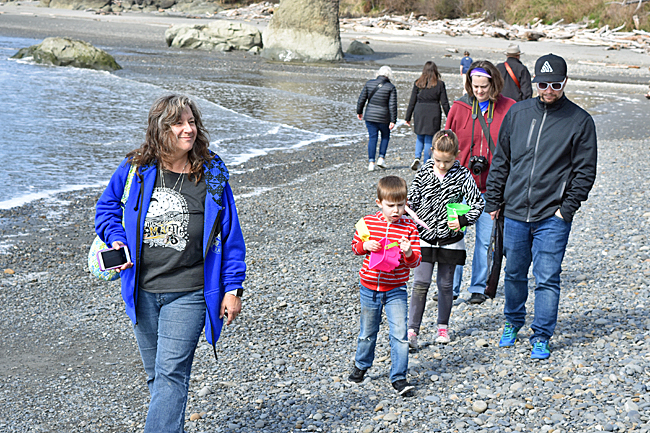 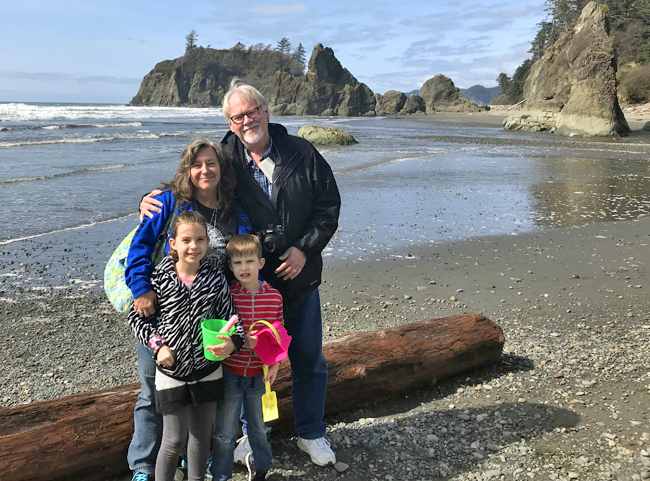 This is a panorama shot I took looking out to the Pacific Ocean from Ruby Beach.

I’m pretty sure that Cindy and I will always remember our first trip to the Pacific Ocean together and how much we enjoyed Ruby Beach in Olympic National Park. Thanks, Wendy, for taking this photo of us together on the beach. 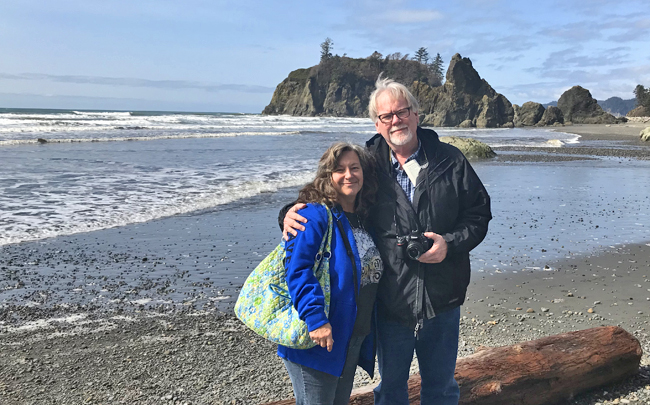