I was 10 years old in January of 1966 when the Batman TV series premiered on a Wednesday night. I was already a regular reader/collector of the Batman comic books and a regular viewer of the late 1950’s Superman TV series which was airing in reruns, so to say I was excited that night would be an understatement. One of the biggest kicks was that during its first two seasons, the show aired two nights a week with the Wednesday night episode being a cliffhanger that almost always involved the Dynamic Duo’s certain death so you would tune in on Thursday night to see the conclusion. 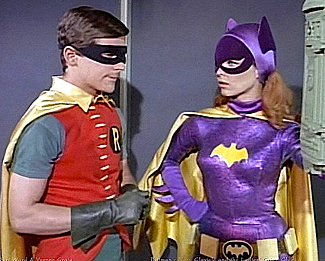 The third and final season changed to a once-a-week format, but an even bigger change was the introduction of Batgirl. To a 12 year old going on 13, this was a welcome addition.

And then, after 3 seasons, the Batman TV series was gone, cancelled due to low ratings, and I never saw it again until 21 years later.

In 1989 the first Batman movie (starring Michael Keaton as Batman and Jack Nicholson as The Joker) was released and one of the national cable stations decided to air reruns of the Batman TV series as a way to cash in on the movie hype. My own son was 13 and I wanted to share with him the wonder of what I felt when I watched the shows at the ages of 10, 11 and 12.

It was a bust, lol. The late 60’s show did not translate well to late 80’s youth and we stopped watching after a couple of episodes.

All of the above is the lead-in to the big news that Warner Brothers Home Entertainment has announced it will be releasing all 3 seasons, 120 episodes, of the original Batman TV series on DVD this November (just in time for Xmas giving!!) a little more than 45 years after the final episodes originally aired. Each episode is remastered and both Blu-ray and HD versions will be  available, all with bonus features.

As a teaser, Warner Brothers released this short trailer about the DVD.